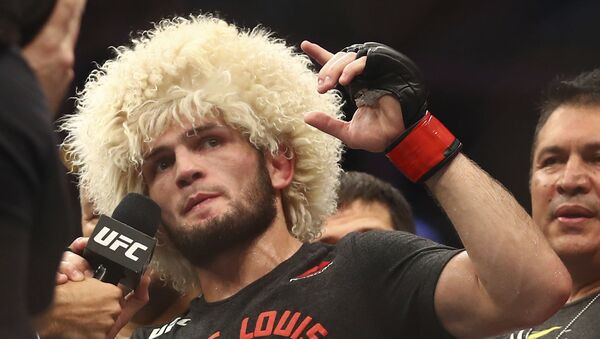 © AP Photo / Mahmoud Khaled
Subscribe
Russian UFC lightweight champion Khabib Nurmagomedov, who currently holds the longest undefeated streak in MMA history, has previously stated that his next opponent in the octagon will be the legendary Tony Ferguson. However, some comments from his manager now suggest that US boxer Floyd Mayweather Jr should not be excluded from the list.

Ali Abdelaziz, the manager of Russian mixed martial artist Khabib Nurmagomedov, seems to have hinted that a boxing match between his ward and undefeated US boxer Floyd Mayweather could take place in January next year.

Mayweather, who has remained undefeated in 50 matches throughout his career, has been retired for more than two years now, but recently sparked rumours of a return after being spotted with UFC President Dana White. He then publicly announced that he would be “coming out of retirement in 2020” and that he was working with White “to bring the world another spectacular event in 2020” on his Instagram page.

Coming out of retirement in 2020

While it is still unclear whether a cross-code bout between the two athletes, who fight in different disciplines, will actually take place, as it would require special boxing training for Khabib, Abdelaziz posted a teaser advertising a potential fight in Saudi Arabia in January 2020 on Twitter.

This was originally planned but the big Dady of combat sport today @danawhite make @floydmayweather hide for a lil bit . 3 of us knew what happened but to be honest I’m glad to see @danawhite with @floydmayweather finally got a good promoter to promote his fights pic.twitter.com/0USz7cX14U

The revelation left fans shocked, with many suggesting that it would not be a great idea for Khabib, who currently holds the longest undefeated streak in the history of MMA, but has never fought in boxing matches before. Many even criticised Abdelaziz’s bid to encourage a fight between the two legends for financial purposes, without actually caring about Khabib’s reputation or health.

Massive Khabib stan but he will get rekt pic.twitter.com/QcKdvUF50A

You're selling Khabibs reputation and health. You know he'd get whooped badly, but you don't care because it'll pay. Sad.

Khabib needs that $. We all know he gonna lose.

Khabib’s father and trainer Abdulmanap Nurmagomedov also previously speculated about a possible boxing match with Mayweather following his son’s victory against Dustin Poirier in September, saying that Khabib needed to do “some boxing training” first and also face the legendary Tony Ferguson in “the best fight in the history of the UFC”. Khabib also maintained that he preferred to see Ferguson as his next opponent in the octagon over boxing against Mayweather.

Khabib’s vocal rival Conor McGregor, with whom a post-bout brawl gave the Russian fighter nine months of suspension, has also previously held an exhibition match with Mayweather, despite apparent cross-coding, where the Irish MMA fighter lost by technical knockout in the 10th round.