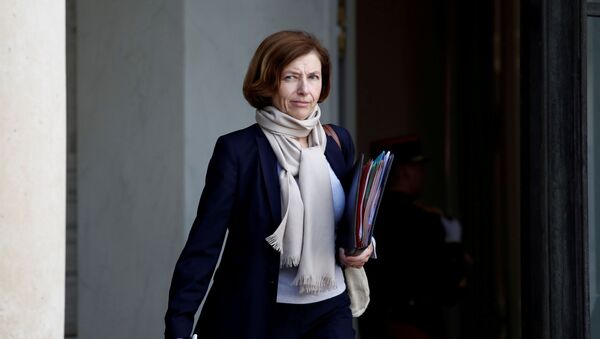 © REUTERS / Benoit Tessier
Subscribe
Lilia Dergacheva
All materialsWrite to the author
Florence Parly has insisted there is only one way to deal with the US ebb in the Gulf, and this is in no way repeating its “maximum pressure” policy of perpetual sanctions, but for Europe to engage in a separate collective mission.

French Defence Minister Florence Parly took a dig Saturday at “deliberate gradual US disengagement” in the Middle East, accusing it of failing to respond to Gulf provocations blamed on Iran. The Islamic Republic has in turn flatly denied any involvement in the recent attacks.

“When the mining of ships went unanswered, the drone got shot. When that in turn went unanswered, major oil facilities were bombed. Where does it stop? Where are the stabilisers?” Parly queried taking the floor at the annual Manama Dialogue on regional security in Bahrain.

She added it had been “on the cards for a while” but had become much more apparent in light of recent events.

“The region is accustomed to the ebb and flow of US involvement. But this time it seemed more serious", the French defence chief pointed out.

She noted that the US disengagement is a “slow process”, acknowledging that the only recent indicator of Washington’s “commitment” was the US aircraft carrier strike group Abraham Lincoln, which sailed through the Strait of Hormuz to demonstrate the freedom of navigation, as the Pentagon stated last week.

The French defence minister also addressed maritime security in the Gulf, taking a swipe at Washington launching a Bahrain-based maritime coalition to safeguard shipping in the strategic area. Parly brought up a European mission, separate from the US one, noting it is set to to launch “very soon".

“We want to make clear that our policy is separate from the ‘maximum pressure’ American policy", she said, in an apparent reference to Washington’s rapidly snowballing sanctions against Tehran.

“I would like to add that we are not subtracting anything, we are adding, as a number of countries would not have participated in the American initiative anyway", she stressed.

Since May, tensions in the Gulf have gained momentum, as attacks targeting tankers regularly hit the headlines, along with the downing of a US unmanned drone and strikes on Saudi Aramco oil refinery in September.

Parly also weighed in on the recent debate over NATO’s values and decision-making, arguing it remains  the pillar of European security, albeit acknowledging that it is “time to move from brain-dead to the brainstorm”, referencing Emmanuel Macron's vivid depiction of NATO's "cerebral death".

Six oil tankers, belonging to Japan, Norway, UAE, and Saudi Arabia, were attacked in two separate incidents in May and June 2019 in the Persian Gulf, while Iran’s Sabiti was assaulted in the Red Sea in October. The right side of the tanker was significantly damaged, with the holes leading to a brief oil leak that was soon stopped. The ship's operator, the National Iranian Tanker Company (NITC), said in a statement that the damage was likely the result of a missile attack.

While the US attributed the May and June attacks to Iran, despite the latter vehemently denying any involvement and Washington presenting no hard evidence of this, the UAE, which investigated the May incident, concluded that the attack had happened at the hands of a state actor, but failed to name the culprit.

Regarding the Sabiti incident, the US didn't issue comments on the possible culprits, while Iranian President Hassan Rouhani pledged a thorough investigation into the case, assuming one or multiple state actors were behind it.

However, in September, the US found fault with Iran over a drone attack on a Saudi Aramco oil refinery that forced the national oil company to temporarily shut down a couple of its oil fields. In response, Tehran accused the US and its allies of switching from a policy of “maximum pressure” to that of “maximum deceit".