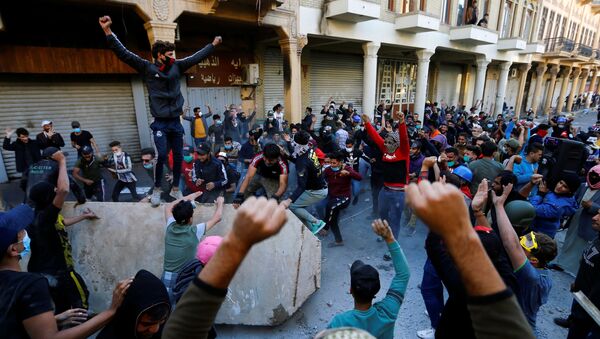 © REUTERS / Thaier al-Sudani
Subscribe
At least seven protesters were killed and more than 50 people injured during anti-government demonstrations in Baghdad on Thursday. Despite previous concessions by the Iraqi government, an anticipated end to the protests seems further away than ever before as the protesters’ messaging now appears more and more fractured, an expert told Sputnik.

In the last few weeks, waves of protests in Iraq has seen the deaths of some 325 individuals and injuries to thousands more. Citing police and hospital sources, Reuters reported that police have killed protesters using live ammunition and also fatally fired tear gas canisters at people’s heads.

According to Al Jazeera, another three individuals were killed on Friday and at least 27 were injured.

Massoud Shadjareh, founder of the Islamic Human Rights Commission, joined Radio Sputnik’s Loud and Clear on Friday to provide his thoughts on why demonstrations are taking a turn for the worse.

Shadjareh told hosts Brian Becker and John Kiriakou that while there appeared to be hope and room for demonstrators voices to be heard by the government in the beginning of the protests, “demands are changing” and “the whole nature of the demonstrations [is] changing.”

Initially, demonstrators were rallying around the common goal of ridding the Iraqi government of “corruption,” highlighting officials’ “failure [to] look after everyone” and creating “an infrastructure that was supportive of the people,” he explained.

In addition to protestors having a common goal, strides were made to change the Iraqi government earlier this month when Prime Minister Adel Abdul Mahdi pledged to step down after his successor was named.

Shadjareh pointed out that Grand Ayatollah Ali al-Sistani, Iraq’s head Shia cleric, also recently expressed support for the protesters as said that “new faces” were necessary to restore the public’s trust in the government.

"If those in power think they can evade dealing with real reform by procrastination, they are mistaken," the Shia leader said on November 15, as reported by Al Jazeera. "What comes after the protests is not the same as before, so be careful."

This formerly cohesive message has now become skewed, and according to Shadjareh, larger, more complex issues such as sectarianism are being pushed as primary issues by select groups of demonstrators.

“We need to recognize that there are interests in Iraq,” Shadjareh asserted. “Those interests are going to be … pushed on the back of these genuine concerns of the Iraqis, and there will be manipulation.”

However, he argued, it is essential to remember that the problem with Iraq, in addition to Daesh and the lack of military assistance, “was the invasion” by the US in 2003. “The whole of the infrastructure of Iraq was shattered,” Shadjareh said. “Iraq had to rebuild” with the help of Iran, and now, Tehran's positive relationship with Baghdad is being reframed by “colonial powers” as a malign influence.