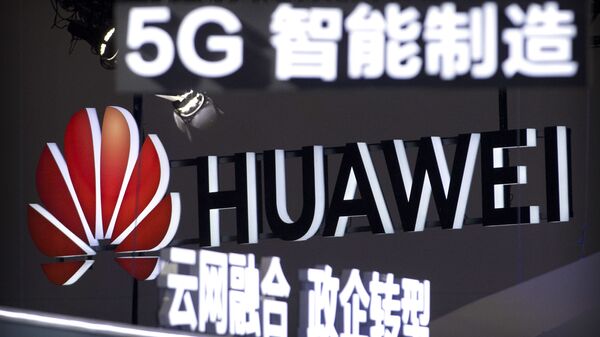 © AP Photo / Mark Schiefelbein
Subscribe
International
India
Africa
According to the German chancellor’s CDU colleagues, there is an urgent  need to work out certain “security standards” to effectively decide if Huawei’s 5G technology will ultimately take hold in Germany, which, as it has emerged, has been widely using the tech giant’s previous-gen breakthroughs.

Angela Merkel's Christian Democratic Union (CDU) unanimously approved a motion on Saturday to debate in the Bundestag the involvement of Chinese tech firm Huawei in setting up the nation's 5G network - a promising technological development for the country.

An earlier report in the newspaper Bild suggested leaders of Angela Merkel’s CDU have defied the German chancellor by supporting a motion to push the Bundestag to weigh in on the government’s policy on Huawei.

A number of CDU parliamentarians had initially filed a conference motion calling on Huawei to be excluded from building the new 5G network, but the motion was later amended to remove the demand, although the government has been advised to “quickly” roll out the bill to the Bundestag.

The amended initiative secured the backing of a number of CDU MPs, including former minister Norbert Röttgen and the party's General Secretary Paul Ziemiak, and Defence Minister Annegret Kramp-Karrenbauer, Merkel's successor as party leader, according to unnamed Bild sources.

Kramp-Karrenbauer told RTL on Thursday that the new initiative paves the way for defining “the security standard", and “we will check whether it will be adhered to", she shared with the broadcaster.

However, Jennifer Gross, from the CDU's Rhineland-Palatinate delegation, as cited by the DW, dismissed the claims that the party was countering the chancellor and pursuing a different policy:

"We will support the chancellor in her course, though of course there are differing opinions and wings in the party", Gross said adding she "will be interested to see the results today".

Röttgen also pointed out to Bild that “the amendment is marginal", although the inclusion of the Bundestag in decision-making is deemed as likely to annoy the chancellor.

For the time being, no final decision has been made on whether Germany will allow Huawei to install its networks across the country, amid rising concerns that the Chinese telecom giant may incorporate “backdoors” on German communications infrastructure for Beijing to spy on it.

Speaking to the newspaper Tagesspiegel earlier this week, Röttgen argued that "we must not allow any Chinese state influence on the 5G net" and suggested that instead, Germany should seek to support European technological advances and make use of them.

Merkel’s stance on the cutting-edge 5G infrastructure, now in the making across the world, is that all bidders are highly welcome as long as they meet certain security requirements voiced by Germany’s two respective authorities: the Federal Office for Information Security (BSI) and the Federal Network Agency (BNetzA).

Germany’s top internet and smartphone operator Vodafone Germany has stressed that Huawei technology is already crucial and in wide use across Europe. For instance, Vodafone already uses 2G, 3G, and 4G Huawei antennae in Germany, and half of the already installed 5G antennae were also manufactured by the Chinese company, which says it has been supplying its products and installing them in Germany for at least 10 years now.

"The entire European telecommunications industry would have difficulties if Huawei network devices were no longer allowed", Vodafone told DW adding that "a ban on Huawei products in Germany would mean the installation of 5G would be significantly more expensive and would be delayed — especially in rural regions".

According to Lars Hilse, German digital strategy consultant, the CDU didn't "categorically rule out the deployment of Huawei hardware, yet did propose a more general approach in which deployed hardware of any country may compromise the security of a German mobile network, requesting a clearly defined security catalogue on how to build such a network of the future in a trustworthy fashion".

"This is generally kind of impossible considering their 70% percent stake in the market segment. From my knowledge, the gear is already planned by almost all German carriers, if not already deployed. We have to consider that Huawei has offered their code for stringent review by a few intelligence services and governments, and offered Germany a contractual 'no backdoor agreement'", Hilse says.

According to Hilse, the question here is what the consequences would be, "even if this agreement were breached down the line", given that millions of pieces of hardware would already be deployed, "which probably can't be replaced by other vendors very easily".

"Worth mentioning is that it won't be Huawei actually building the network, but Deutsche Telekom, Vodafone, etc. as the carriers will be, making them free to use either Huawei or other network equipment providers like Nokia, but also US based companies. To conclude: in light of both the no backdoor agreement on the table, as well as the already performed audit of the code being deployed to Huawei hardware I believe that a lot of the public debate is based on ilinformed opinion building, and biased media coverage".