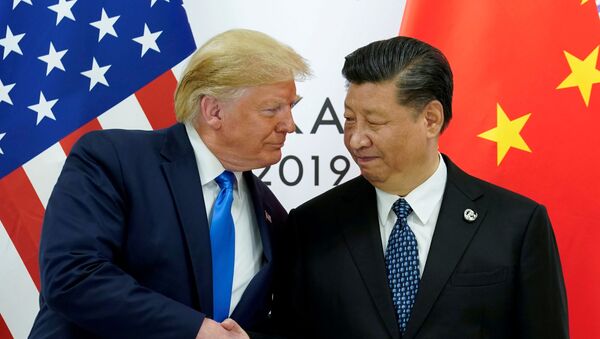 © REUTERS / Kevin Lamarque
Subscribe
With the US Congress’ recent passage of two bipartisan-backed bills supporting anti-government protests in Hong Kong, US President Donald Trump, who is embroiled in trade negotiations with China, will now have to weigh both ethics and economics over the next several days.

Wednesday was a big day in the US Congress for Hong Kong demonstrators, as lawmakers sent both the Hong Kong Human Rights and Democracy Act of 2019 and the PROTECT Hong Kong Act - which prohibits the export of select munitions to Hong Kong authorities - to the president with nearly unanimous support.

The U.S. Senate has now joined the House of Representatives in passing the Hong Kong Human Rights and Democracy Act. The people of #HongKong have woken up to the news that both branches of the U.S. Congress stand with you in your fight for democracy and the rule of law.

According to sources “familiar with the matter,” Trump is expected to sign both into law. In anticipation of the bills’ enactment, the Chinese Foreign Ministry asserted Beijing will “resolutely fight back.”

"We strongly condemn and firmly oppose the passage of relevant Hong Kong-related bills" ministry spokesman Geng Shuang said following the presentation of the bills to the desk of Trump.

KJ Noh, a peace activist, scholar on the geopolitics of Asia and frequent contributor to CounterPunch and Dissident Voice, joined Radio Sputnik’s Loud and Clear on Thursday to discuss the passage of the bills and Trump’s predicament concerning trade talks with China.

Noh told hosts Brian Becker and John Kiriakou that while US lawmakers appear unable to agree on matters close to home, they - including Trump - “speak with one voice” when it comes to matters of foreign policy.

As for the Chinese government’s response, the peace activist contended that lawmakers should take heed of the language of Chinese Foreign Minister Wang Yi’s comments.

“We regret to see that some politicians in the United States are now smearing, attacking, slandering China to a level close to madness,” Wang said, as reported by the South China Morning Post. “These practices have seriously poisoned the atmosphere of Sino-US relations and have impacted the mutual trust we have built over the years.”

Noh explained that Wang chose words of a sort “rarely used” by the foreign ministry, but they are applicable in this case, because the bills Congress has passed “are essentially a one-pump, one-shot punishment that will actually damage [US-China] relations” and could be seen as a “declaration of war.”

Section 3, subsection 5 of the Hong Kong Human Rights and Democracy Act of 2019 notes that it is the policy of the US that Hong Kong should, by 2020, establish “open and direct democratic elections for all members of the Hong Kong Legislative Council” - a point also listed in the “five demands” of Hong Kong protesters.

Failure to adhere to the directions laid out in the bill will put China at risk of economic sanctions by the US.

That said, Noh contended that Trump is now faced with a double-edged sword, because while he is expected to sign the bills, doing so could precipitate a further breakdown in trade negotiations for the US. Noh argued that if China were to walk away from the trade deal, it would cause the “US economy” and “world economy” to enter a recession and lessen Trump’s chances of reelection in November 2020.

However, Noh added, “By all odds he cannot not sign it, given that he’s currently undergoing impeachment,” and going against the bipartisan-backed bills would do him no favors in the proceedings.

000000
Popular comments
Come on Trump have the guts to sign those 2 bills. I love to see China getting pissed off and walk away from the table now and for a long time. What will yo be doing then? Payback by the Chinese will be bitch and torpedoes your 2020 election. :-) Then again there are no competent politicians left in America like in many other Western countries