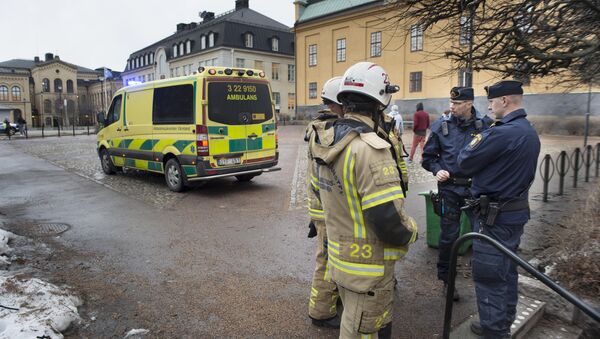 © REUTERS / Tommy Pedersen/TT News Agency
Subscribe
Senior analyst Henrik Häggström, who previously compared Sweden to Afghanistan when it comes to the number of explosions in the country, said it was approaching a grey zone between peace and war.

Closer cooperation between organised crime and Islamist jihadists is one of the reasons for the increased number of explosions in Sweden. The groups often overlap and it becomes increasingly difficult to separate them, Swedish Defence College senior analyst Henrik Häggström, who specialises in military threats, terrorism, and extremism, told the news outlet Nya Tider.

With some 175 blasts so far this year, Sweden appears firmly on its way to set a new morbid record.

“We are getting more and more areas in Sweden that are vulnerable and are dominated by organised crime and a widespread silence culture”, Henrik Häggström told Nya Tider, likely hinting at some 60 areas unofficially referred to as ghettos or no-go zones, as opposed to the official “vulnerable areas” term.

“When it is no longer just shootings, but bombs are also being used, third parties also experience an ever-increasing threat and security is being jeopardised. Then we approach a grey zone between peace and war”, he concluded.

Earlier in November, Häggström called the situation in Sweden “exceptionally difficult”, his country being an outlier not only in Europe, but internationally. He went so far as to suggest “going to Afghanistan” to find a similar situation per capita. Recent reports indicate an increasing trend of home-made explosives and thermos bombs in blasts across Sweden, which some experts have traced to the Middle East.

Sweden's Spread of Explosives Stuns US Police Boss
Häggström also singled out a deeply-rooted clan culture, with unofficial trials, mob law, and witness intimidation, as one of the reasons for the situation, where Swedish law no longer applies. While presenting a recent threat report he co-authored, Häggström called clan-based underground societies “system-threatening”, suggesting they undermine both the justice system and the very essence of democracy.

“To put it simply, you can say that the clan often serves as a replacement, or a precursor, to the state”, the report said.

“Violence capital is growing, the fact that shootings and blasts are going on at such intensity makes the threats to the public more tangible locally”, Häggström noted.

With 175 blasts this year, Sweden has already seen a dramatic year-on-year jump compared with last year's 113.

“This is no longer a big city problem, but a phenomenon that has also spread to smaller cities in middle Sweden for example”, head of the police intelligence unit Linda Staaf told Swedish Radio earlier this month, suggesting that the blasts are used for a variety of purposes, such as extortion, retaliation, and threats.

000000
Popular comments
Dear Herr Häggström, dear Swedes, don't be blasphemic! Immigration will never be a threat to society! Didn't your Masters and Commanders from Langley and New York tell you so? The one and only threat to Swedish state and society comes from Russia! Your cities are just fine, don't care to much about them, buy US-weaponry and stare stubbornly eastward!