Floyd Mayweather Hints at Comeback in 2020 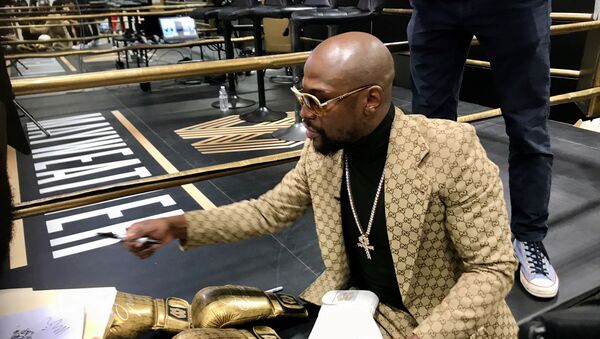 © REUTERS / RORY CARROLL
Subscribe
In an interview with Reuters earlier this week, 42-year-old Floyd Mayweather said that he was done with the “very brutal sport” of boxing, though he had had calls to return boxing.

On Thursday evening, the former multi-division boxing world champion published a photo on Instagram with his hands wrapped in tape and clad in boxing trunks with a caption reading "Coming out of retirement in 2020".

At the moment, it's unclear on what type of a comeback Mayweather is hinting at. The boxing superstar retired in 2015 with 49-0 professional record and made a comeback in 2017 only to face UFC’s Conor McGregor - the fight that gave Mayweather his 50th career victory.

Coming out of retirement in 2020

Since then, Mayweather has turned all his attention to his chain of Mayweather Boxing + Fitness gyms and his promotion company, while doing exhibitions as well.

“I’ll still travel and do exhibitions. I make great money doing exhibitions — between 10 and 30 million dollars", Mayweather told Reuters earlier in the week.

Commenting on his return to boxing, Mayweather stated in the same interview that "my health is my health" while noting "a lot of fighters have died" inside the ring in the past few years.