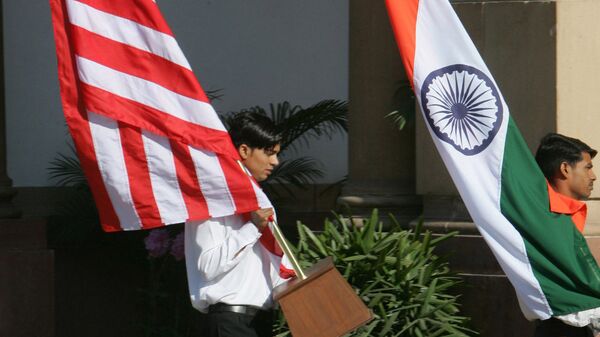 The United States has asked India to secure its defence technological process to receive high-end defence technology from the American industry, as Washington is concerned that Moscow may allegedly snoop on critical technologies.

"And so the Indians, while very interested – as they should be – in co-research, co-development, and co-production – which we are interested in, and our industry’s interested in – we don’t want it [American technology] exposed because some Russians walking the shop floor decide to go walk away and put it in their handbag or knapsack and take it back to Moscow", a senior State Department official said, while briefing the media on Thursday.

The statement came against the backdrop of a recent setback on sharing defence technology, when the two “strategic partners” announced the suspension of a critical project for the co-development of a fighter jet engine after it fell afoul of US export controls.

American official said that Washington does not want the unique technology, either developed in the United States or co-developed with other partners, to be stolen and exploited by others.

“We’re not going to allow that. And so what we have pushed with Indians is: tighten up your procurement processes, tighten up your defence technology security processes and protocols, and then you’re putting yourselves in a much more mature space to be a tighter, closer partner”, the senior US State Department official emphasised.

The "Defence Technology Trade Initiative" (DTTI) was launched in 2015 to do away with hurdles in sharing defence technology with India. The initiative has, however, remained a non-starter for several reasons.

“India has been exploring the possibility of obtaining newer technologies from other countries to fast-track the process of bridging the gap between the existing capabilities in India and the state-of-art technologies available in the US and other countries. This is largely because ab-initio development of modern technologies is time-taking and expensive. But, we have to keep in mind that the US or any other countries will never share state-of-the-art technology”, former financial adviser to the Indian Defence Ministry Amit Cowshish said.

Nevertheless, the US, which has recognised India as a major defence partner, has tried to sell some 40 defence technologies to India since the launching of the DTTI, but sources said that these were too obsolete and India refused all of them at different times.

Last month, during the ninth DTTI meeting, India and the US again signed a statement of intent to strengthen dialogue and cooperation on specific projects, including lightweight small arms technologies and air-launched Unmanned Aerial Systems.

During the next US-India 2+2 dialogue – a dialogue format in which the foreign and defence ministers meet – it is expected that New Delhi may formally sign a much-awaited agreement on industrial security, also known as the Industrial Security Annex (ISA), on 18 December. This, again, is considered to be an important agreement if any country wants to receive high-end technology from the US.