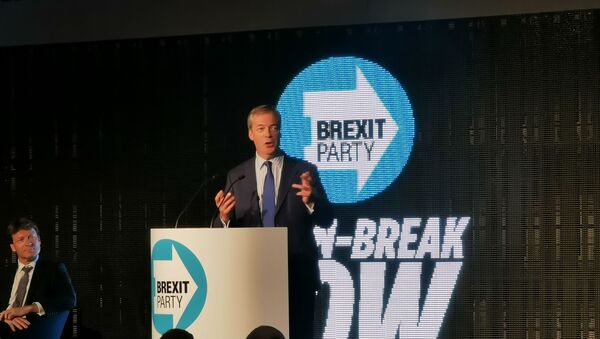 The Brexit Party has outlined its policies ahead of December’s general election, falling shy of publishing a full manifesto. Party leader Nigel Farage has stated that he would pursue tighter immigration control, raised corporation tax thresholds and the potential abolition of the House of Lords.

UKIP founder Alan Sked has shared his views on the Brexit Party’s participation in the British general election.

Sputnik: Could the Brexit Party’s participation in the British general election lead to another hung parliament?

Alan Sked: I don’t think their participation will lead to a hung parliament, it seems to be getting very tightly squeezed and the chances are the Brexit Party will not get any MPs elected, while the Conservative Party machine will be able to more or less ignore them, so my expectation at this moment is that the Conservatives will get an overall majority and that the Brexit Party will end up being irrelevant.

Sputnik: Should Nigel Farage have withdrawn even more candidates ahead of December’s general election?

Alan Sked: I think he really should have just stood them all down, he’s got no chance as far as I can see of winning any seats, but if he took sufficient votes from the Conservatives; he could still prevent Boris Johnson from getting a majority, although that’s looking a bit more unlikely now. Farage seems to be playing the role of spoiler, rather than being a positive force.

Sputnik: Would departing the EU under the terms stipulated in Boris Johnson’s Brexit deal be beneficial for the UK?

Alan Sked: It’s not a perfect deal by any means, but as far as I can see; he has secured sufficient terms to satisfy most moderate Brexiteers, his deal is the only one on the table and I think that if it unravelled now; people would get very fed up of Brexit, and the danger would be that we would get no Brexit at all.