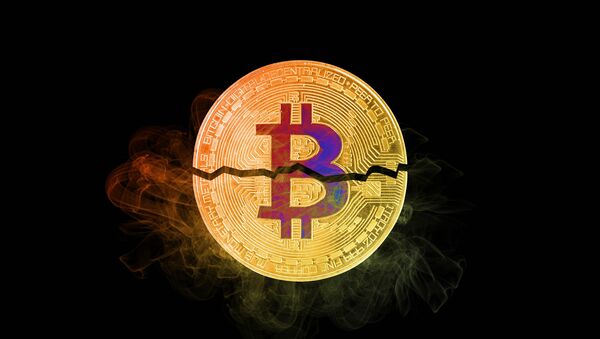 CC BY 2.0 / Marco Verch / Bitcoin broken in half
Subscribe

Aleksandra Serebriakova
Moscow-based Sputnik correspondent specializing in foreign affairs.
All materialsWrite to the author
The bitcoin cryptocurrency has been on the rise since January 2019, increasing its market value by almost twofold in the last 11 months. Now, something unexplained has happened, leading to a sharp fall in the value of the blockchain-backed digital currency since yesterday.

The world’s most famous cryptocurrency has plunged to a six-month low over the course of the last 24 hours, and analysts remain puzzled as to the reasons for the dramatic crash.

The price of bitcoin has slumped to less than $7,400 for the first time since May, while reaching its lowest market value point of less than $7,000 on Bitstamp on 22 November and ultimately falling  by more than 10 percent over the course of the day.

​While it looks like the downtrend will continue, cryptocurrency analysts have been unable to articulate clear reasons for the sudden crash, fearing that a further plunge of bitcoin to $6,800 cannot be fully ruled out, according to CoinDesk estimates.

Science & Tech
China Reverses Decision to Crack Down on Bitcoin Mining Industry
Bitcoin is not the only cryptocurrency that has dropped dramatically in the last 24 hours, with ethereum, ripple, and bitcoin cash also experiencing losses of between 5 to 15 percent of their value.

Bitcoin had managed to increase its market value by almost twofold since January 2019, when its price was less than $4,000, prompting hopes that it would continue to rise, especially after China openly reversed its stance on cryptocurrency and the application of blockchain technology in the country.