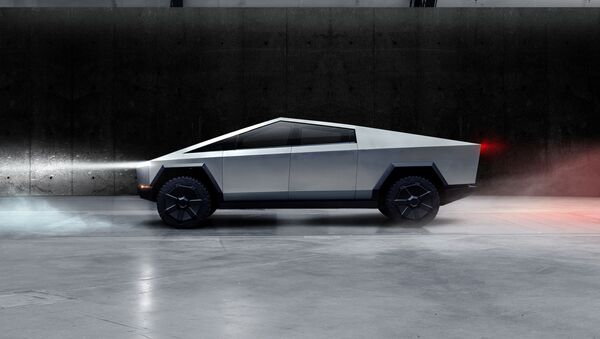 © REUTERS / Tesla
Subscribe
International
India
Africa
Elon Musk had warned that the truck's design may turn people away, saying Tesla’s new project looked like an armoured personnel carrier from the future and it seems that the maverick engineer wasn't lying…

Tesla has unveiled its first pickup truck, which Musk said would combine the performance of a Porsche 911 and functionality of Ford’s F-150 full–size truck as the company plans to shift to making SUVs and trucks, the heart of US car market. At the launch event in Los Angeles on Thursday Elon Musk said production of the vehicle would begin in 2021 or late 2022.

Nobody *expects* the Cybertruck pic.twitter.com/khhYNFaVKs

Elon Musk and Tesla’s chief designer Franz von Holzhausen showed how the vehicle can withstand blows from a sledgehammer, because its body is made of an ultra-hard stainless steel alloy that SpaceX, Musk's other company, plans to use in building rockets. Musk also claimed that the truck is bulletproof to 9 millimeter bullets. The demonstration of the vehicle’s windows made of armoured glass did not go smoothly though – when Tesla’s chief designer hit the window with a big metal ball it cracked, although the ball did not go through.

Despite this setback people in the audience and social media users were impressed by the vehicle’s specs and features, however the car’s pointy design, which Musk said was partly influenced the by Lotus Esprit sports car from the James Bond film "The Spy Who Love Me", became the topic of heated discussions.

The maverick engineer and businessmen previously warned that Tesla’s brainchild is “not going to be for everyone” saying it would be like a futuristic cyberpunk vehicle or an armoured personnel carrier from the future. Social media users asked what had happened to Tesla’s designers, saying people wouldn’t want to drive this car.

This is just a terrible terrible looking truck. Love the engineering it but I just can't see anyone going down the road in this.

When did #Tesla sack all their designers? I'm glad I can't see it from the front or back! Oh wait I did. OK I can see a couple of good points but they don't outweigh the bad.

And seriously could anyone have that parked in their driveway and people not drive past honking?

Some users criticized the company’s old-fashioned presentation, which they said was aimed at distracting attention from the truck’s poor design.

I see @TESLA has taken a page from 1970’s American car makers reveals:

When the design is poor, use lots of lasers, fireballs, smoke, and loud music to distract the eye and fool the brain.

​Despite heavy criticism many users fell in love with Tesla’s brainchild and said that the truck’s design will grow on people.

Absolutely.. A mind bender. A smash hit, pardon the pun. Thee most radical vehicle I have seen this side of the Bat Mobile. Epic.

​Musk previously said that Tesla would opt for a more conventional look if consumers don’t like the truck’s futuristic design.