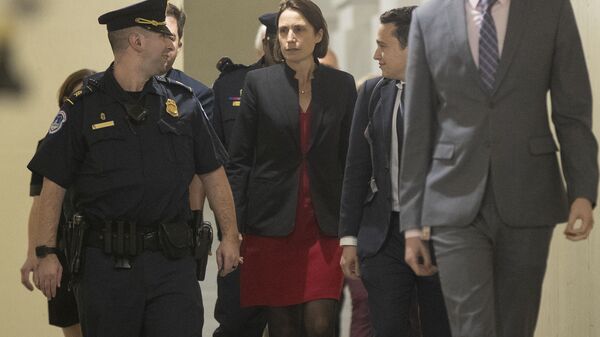 Dr Fiona Hill is set to appear before House Democrats looking into allegations of POTUS Trump's requests to Ukraine to dig up dirt on his 2020 rival, Democrat Joe Biden, in exchange for resumed aid.

Fiona Hill is the 11th witness to testify publically since the televised phase of the impeachment inquiry kicked off last week.

Hill is a central figure in the Ukraine call controversy, having allegedly borne witness to two meetings pertaining to Trump’s exchange with Volodymyr Zelensky – one that POTUS dubbed absolutely benign and the transcript of which he vowed to read out loud.

Hill co-authored an insightful book on Russian President Vladimir Putin called "Mr. Putin, Operative in the Kremlin". The politician is portrayed as a multi-faceted person - “the Statist, the History Man, the Survivalist, the Outsider, the Free Marketeer, and the Case Officer", per a press release stating that “Russia experts Fiona Hill and Clifford Gaddy” base their narration on “a range of sources, including own personal encounters".

Hill, who studied for degrees, including a PhD, at the University of St. Andrews in Scotland and Harvard University, had previously travelled to Russia. She happened to be there during the historic summit between President Ronald Reagan and Soviet General Secretary Mikhail Gorbachev in 1988.

5. Second Testimony: Anything New to Come?

In 2017, she joined Trump's National Security Council, serving as the senior director for Europe and Russia. Responding to a subpoena, she already testified behind closed doors in October, claiming she heard EU Ambassador Gordon Sondland outline a quid pro quo offer to the Ukrainians.

"Well, we have an agreement with the Chief of Staff for a meeting if these investigations in the energy sector start", Sondland told Zelensky's delegation, according to Hill, who argued that the “energy sector” was perhaps a euphemism for Burisma, which employed Biden’s son.

The Europe and Russia expert opted to step down in August 2019, and was replaced by Tim Morrison, who resigned on 31 October 2019.

Hill’s appearance in front of Congress comes as the public phase of the Trump impeachment inquiry has entered its second week, upon pressure from Republicans to make the proceedings transparent.

The inquiry surrounds Trump’s alleged abuse of power, with POTUS arguing he hasn’t committed anything impeachable and calling the inquiry a purely political move and a new round of “witch hunt garbage".

He insisted no quid pro quo arrangements with Kiev had been made, while the Democrats have been alleging he conditioned aid to Ukraine on a probe into the Biden family's potentially corrupt operations in the East European country.