The Second Highest: 'Portrait of a Lady in White' by Frida Kahlo Sells for $5.8 Million - Christie's 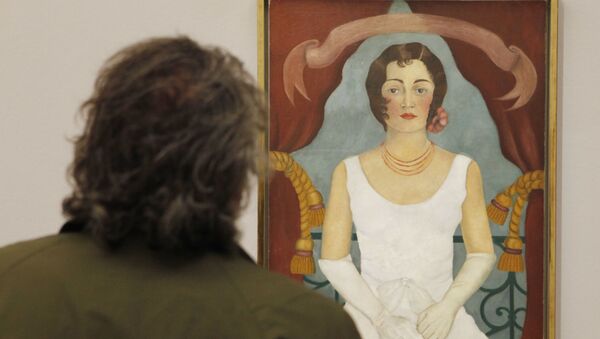 The "Portrait of a Lady in White" is believed to have been painted in 1930. Frida Kahlo and her spouse Diego Rivera were residing in San Francisco at the time, and Frida painted a few portraits, mainly of their friends or wives of Rivera's assistants.

Mexican artist Frida Kahlo's "Portrait of a Lady in White" has earned the highest price at an auction of Latin American art at Christie's in New York, the British auction company said in a statement. Kahlo's work sold for $5.8 million and according to Christie's, it's the artist's second most expensive piece.

#AuctionUpdate Tonight in our #LatinAmericanArt sale, Frida Kahlo's 'Portrait of a Lady in White' surpasses its high estimate to achieve a total of $5,836,500, the second highest price the artist has achieved at auction. #FridaKahlo https://t.co/gTOjc3r3XH pic.twitter.com/LA7YMT5CTA

​In addition to the painting by Kahlo, a copper plate painted by the artist in 1941 went under the hammer. It was sold for $3.135 million with an estimate of $3-5 million.

In 2016, Kahlo's painting “Two Nudes in a Forest” painted in 1939 at the height of the transatlantic Surrealist art movement was sold at a Christie’s auction for $8 million.