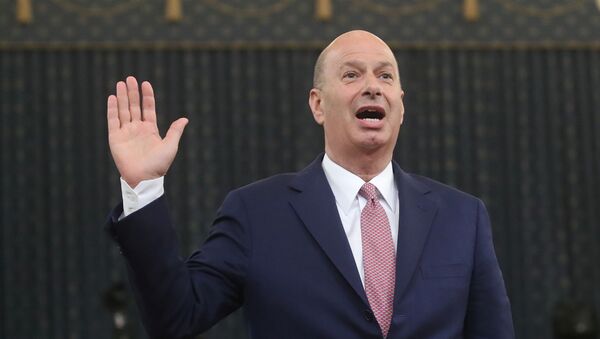 WASHINGTON (Sputnik) - US Envoy to the EU Gordon Sondland's testimony cleared President Donald Trump of accusations that he conditioned military aid for Ukraine and potential meetings at the White House with the Ukrainian president issuing of public statements Kiev would investigate the US president’s political rival Joe Biden for corruption.

"Though much of today’s testimony by Ambassador Sondland was related to his presumptions and beliefs, rather than hard facts, he testified to the fact that President Trump never told him that a White House meeting or the aid to Ukraine was tied to receiving a public statement from President [of Ukraine Volodymyr] Zelenskyy", the White House said in the statement on Wednesday.

Earlier in the day, Sondland testified during the impeachment inquiry in Congress that Trump's said he did not want anything from Ukraine and did not seek quid pro quo, but wanted Zelenskyy to do the right thing.

Sondland also said that he came to believe Giuliani at the time expressed the desires of the US president and added that he eventually came to believe the resumption of US aid to Ukraine was tied to the country's commitment to conduct such probes.

The White House emphasized in the statement that Sondland testified Trump had said he wanted no quid pro quo and that Sondland repeatedly affirmed Trump’s statement during the impeachment testimony.

"That should be the only takeaway from today’s sham hearing, and it was stated under oath by the only person in these hearings who has ever spoken directly to President Trump", the statement said.

US House Democrats launched an impeachment inquiry in September after a whistleblower complaint revealed Trump may have abused power of office during the 25 July phone call with Zelensky.

The complaint alleged Trump pressured Zelensky to investigate possible corruption of the Bidens in their dealings with Ukraine.

The White House subsequently released what it had described as a declassified transcript of the entire phone call, with Trump insisting that there was no quid-pro-quo in his dealings with the Ukrainian president.

Trump also characterized the impeachment inquiry as yet another political witch hunt by Democrats.