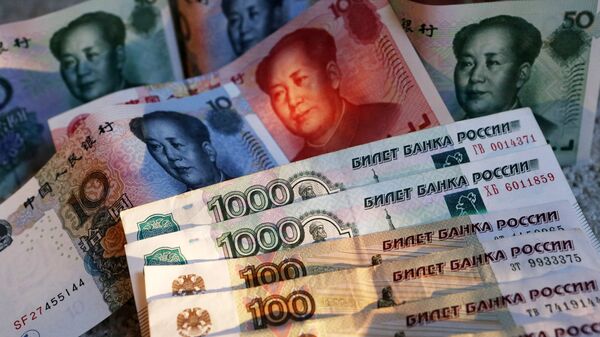 © Sputnik / Alexandr Demyanchuk
/
Go to the mediabank
Subscribe
International
India
Africa
China and Russia signed a memorandum of understanding (MOU) in Shanghai on Tuesday to deepen financial cooperation and push for direct trading between the yuan and the ruble, a move in line with both countries' demand for diversifying reserve assets and reducing dollar reliance amid rising global uncertainties, experts said on Tuesday.

The MOU was signed between the Moscow Exchange and the China Foreign Exchange Trading System & National Interbank Funding Center (CFETS), in a bid to satisfy "economic interest rate and exchange rate hedging demand," said a post on the official website of CFETS.

With a closer political bond, deep mutual trust and the common pursuit of reducing reliance on the US, the two are set to ditch the US dollar in bilateral trade in the future, Dong Dengxin, director of the Finance and Securities Institute at Wuhan University of Science and Technology, told the Global Times on Tuesday.

Dong noted that the move is "critical" as the two have huge cooperation prospects in trade of bulk commodities such as agricultural products, oil products and lumber.

From January to October this year, China's trade with Russia reached 616.4 billion yuan ($87.76 billion), up 7.94 percent year-on-year. China's imports from Russia increased by 8.5 percent, according to data from China's General Administration of Customs.

Dong forecast the trade would climb further as the two strengthen cooperation in advanced sectors such as aerospace.

"The two sides can jointly explore potential business cooperation opportunities, including further developing the feasibility of the yuan's liquidity interconnection to the ruble, so as to better promote the mutual opening of China-Russian financial markets, enhance the level of liberalization and facilitate China-Russian trade and investment," said Zhang Cuiwei, vice president of the CFETS.

Experts said that move, which comes amid China's trade war with the US and Russia's urgent demand to reduce US assets, is the best way to de-dollarization for both countries, and will also push the internationalization of the yuan.

Moscow plans to cut the dollar's share in its $125 billion sovereign-wealth fund, following a major move last year out of US assets by the Russian central bank, Bloomberg reported on November 14.

Russia's Deputy Finance Minister Vladimir Kolychev said that the share of the dollar will be reduced in its reserves and other reserve currencies will be considered, including the yuan and those of other countries, according to the report.

China aims to diversify its foreign reserves in both overt and silent ways during the ongoing trade war between the world's two largest economies, experts said.

China has gradually reduced its holdings of US Treasury debt over the past year. It lost its place as largest holder to Japan in June.

Chinese holdings of US Treasury debt also fell in September to $1.102 trillion, sliding for a third straight month - the lowest since May 2017, according to a Reuters report on Tuesday.

"The country has also been investing in other currency assets in different ways to help China further reduce its dollar assets," Dong said.

However, Zhao Qingming, a financial industry expert, told the Global Times on Tuesday that the US currency is expected to dominate global trade for a certain period, and US Treasury securities are still considered as one of the best assets for investors around world.

"A total or high level of 'de-dollarization' will be difficult for both countries, but it's worth a try. It will take time," Zhao said.