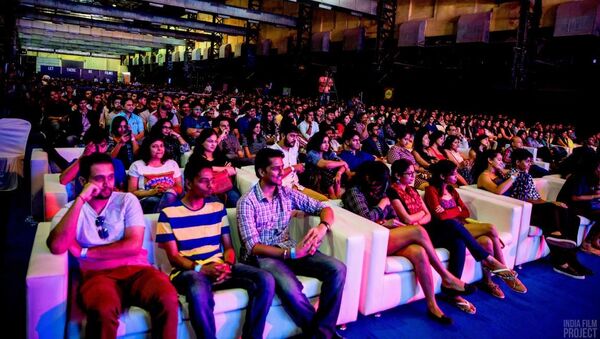 New Delhi (Sputnik): India’s tiny western state of Goa will turn into Cannes for the next eight days, with everyone who counts in Indian cinema and from abroad expected to descend for the Golden Jubilee Edition of the International Film Festival of India.

Arguably two of India’s most iconic film actors, Amitabh Bachchan and Rajnikant will open the festival. Films from Russia will take centre stage and movies by the acclaimed Japanese filmmaker, Takashi Miike, will be screened at the festival.

Italian film "Despite the Fog", directed by renowned documentarian Goran Paskaljevic will kick things off at the festival. "Despite the Fog" is about one of those thousands of minor refugees without parental care wandering around Europe, half of them on Italian roads.

Helmed by one of Europe's most remarkable directors, Goran Paskaljevic, the Italian film "Despite the Fog" awaits you post the Inaugural Ceremony of #IFFI2019 as the Opening Film of the festival.

​The Russian panorama will open with Aleksandr Boguslavsky’s "Abigail"  - the story of a girl named Abigail, who lives in a city whose borders were closed long ago because of a mysterious epidemic. Abby’s father was one of the sick and was taken away when she was six years old. When she starts searching for her father, Abby learns that the epidemic actually never occurred.

This edition of the festival will see over 250 movies in many languages from 76 countries. It also includes 26 feature films and 15 non-feature films in the Indian Panorama section.

The #IFFIAnthem is a harmonious blend of video clips from over 50 films which are beautifully knitted along with the Nav Rasas. This year #IFFI2019 marks the Golden Jubilee Edition of International Film Festival of India, to be held from 20-28 Nov, 2019. #IFFI #IFFI50 @IFFIGoa pic.twitter.com/3KsvxO0pgI

​“IFFI 2019 has a homogenous balance of all shades of cinema ranging from the classics to modern films. This enables everyone to experience the festival in all its glory", said Chaitanya Prasad, the festival's director

IFFI began in 1952 with the patronage of then-Prime Minister Jawaharlal Nehru. It is the first international film festival to be held anywhere in Asia.