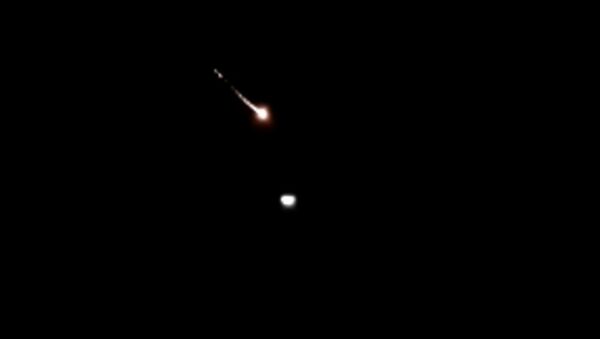 Israel's attacks against Syria are a violation of its sovereignty and territorial integrity, and only serve to escalate tensions in the region, the Russian foreign ministry said in a statement Wednesday.

"Recently, the intensity of Israeli rocket and bomb attacks on Syrian territory have increased sharply...This development evokes the most serious concern and opposition in Moscow. We consider it critically important to respect the sovereignty and territorial integrity of the Syrian Arab Republic and other states in the region," the foreign ministry said.

"In the meantime, Israel's actions only add to tensions and strength the potential for conflict around Syria, and run counter to efforts to normalise the situation, achieve stability in Syria, and see a political settlement reached in this country," the ministry added.

On Wednesday morning, Syrian media reported that the country's air defences had detected and destroyed multiple hostile missiles approaching Damascus starting at around 1:30 am local time. Approximately 20 blasts were reported to have taken place in quick succession. Later, social media footage showed the operation of local air defences against attacking missiles, as well as fires burning on the ground, presumably of targets struck by projectiles which had made it through.

According to the Syrian Arab News Agency, two civilians were killed and several others injured after the shrapnel of one of the missiles hit a residential home. Debris was also said to have hit a second residential building in the Qudsayya suburb west of Damascus, injuring a minor. A military source told the agency that Israeli warplanes had launched their attacks from both the disputed Golan Heights territory, as well as from Lebanese airspace.

Later, the Israeli military, which rarely admits to carrying out attacks on Syrian territory, released a statement confirming the attack had taken place and saying that the air force had targeted dozens of military targets inside Syria, including alleged "Iranian forces." The IDF claimed that the targets included air-to-air missiles, warehouses, and other facilities. The military added that the attacks followed earlier rocket launches supposedly carried out by Syrian forces from Syrian territory targeting Israeli territory.

A photo of what the Syrian ppl living in Damascus are experiencing right now
Damascus is being under attack by a foreign country, rockets have landed and rockets have been shot down by Syrian air defense
Sources are saying Israel is the one attacking us
Date:11/20/2019, 2:30 am pic.twitter.com/yQgCDrWRI0

Prime Minister Benjamin Netanyahu commented on the attacks later Wednesday, tweeting that the late night strikes had targeted "Iranian Quds force and Syrian military targets" and were a response to "last night's rocket launches" against Israel. "I made it clear that whoever is hurting us - will be hurt," the prime minister said.

In recent years, Israel has carried out hundreds of attacks in Syria, and dozens more in Lebanon, Gaza, and Iraq against what it has said was an alleged Iranian presence. The Syrian government invited Iranian advisors and Lebanese militant movement Hezbollah into the country during the foreign-backed civil conflict in the country to assist in Damascus's fight against terrorism. Tel Aviv has argued that these forces could be used in an Iranian proxy war against Israel.

000000
Popular comments
Desperate IDF cowards trying to start a war again.
Putinlover
20 November 2019, 16:23 GMT8
000000
It is Russians who should be taking down the aircraft wherever they launch from regardless.
Aramis
20 November 2019, 16:44 GMT1
000000
Newsfeed
0
New firstOld first
loader
LIVE
Заголовок открываемого материала
Access to the chat has been blocked for violating the rules . You will be able to participate again through:∞. If you do not agree with the blocking, please use the feedback form
The discussion is closed. You can participate in the discussion within 24 hours after the publication of the article.
To participate in the discussion
log in or register
loader
Chats
Заголовок открываемого материала
Worldwide
InternationalEnglishEnglishMundoEspañolSpanish
Europe
DeutschlandDeutschGermanFranceFrançaisFrenchΕλλάδαΕλληνικάGreekItaliaItalianoItalianČeská republikaČeštinaCzechPolskaPolskiPolishСрбиjаСрпскиSerbianLatvijaLatviešuLatvianLietuvaLietuviųLithuanianMoldovaMoldoveneascăMoldavianБеларусьБеларускiBelarusian
Transcaucasia
ԱրմենիաՀայերենArmenianАҧсныАҧсышәалаAbkhazХуссар ИрыстонИронауОssetianსაქართველოქართულიGeorgianAzərbaycanАzərbaycancaAzerbaijani
Middle East
Sputnik عربيArabicArabicTürkiyeTürkçeTurkishSputnik ایرانPersianPersianSputnik افغانستانDariDari
Central Asia
ҚазақстанҚазақ тіліKazakhКыргызстанКыргызчаKyrgyzOʻzbekistonЎзбекчаUzbekТоҷикистонТоҷикӣTajik
East & Southeast Asia
Việt NamTiếng ViệtVietnamese日本日本語Japanese中国中文Chinese
South America
BrasilPortuguêsPortuguese
NewsfeedBreaking
01:58 GMTMike Tyson Reveals Marijuana Makes Him 'Different Person' as He Launches New Cannabis Line
01:52 GMTConcerns About Spread of New Covid Strain Rise as Another Migrant Caravan Crosses Into US - Report
01:28 GMTMass Theft Occurs at Best Buy Store in Minnesota, Police Say
00:26 GMTTrump Keeps Mt. Rushmore Sculpture With His Face on It on Display in His Office
00:01 GMTA Glimpse of Hope: Biden Approval Rating Climbs 2 Points, But Still Scores Low on Economy - Poll
YesterdayAbbott Says Texas Is Ready For Possible Cold Winter Due to ‘Dozen Laws’ Signed
YesterdayBarnier Says France Has to 'Be Ruthless With the British' Amid Migrant Crisis - Report
YesterdayEx-Labour Leader Corbyn Slams 'Irrational' Suspension From Party One Year On
YesterdaySudanese Army Repels Attack by Ethiopian Troops With Casualties on Both Sides
YesterdayWHO Says No Need for Panic Over Omicron Coronavirus Strain as Much Remains Unknown
YesterdayBiden's First Christmas Tree Will Reportedly Cost Taxpayers $139,000
YesterdayMemes Flood Twitter After WHO Dubs New Covid Strain Omicron
YesterdayOmicron Coronavirus Strain May Already Be in US, Going to Spread 'All Over', Fauci Says
YesterdayNCT 2021 Walks Into a Dream in New Teaser Video 'Year Dream: Stage 2 - Surfing in Our Dreams'
YesterdayWHO Confirms Some Guesses on Why It Skipped Two Letters and Named New COVID Variant 'Omicron'
YesterdayFrance Mulls Autonomy for Caribbean 'Confetti of Empire' Amid COVID-19 Rule Protests
YesterdaySolomon Islands Gripped by Anti-China Protests as US Keeps Largely Mum
YesterdayRussia is Not Going to Attack Anyone, Ambassador to US Says
YesterdayWhy Washington's 'Russian Invasion' Scare is Cover for Kiev's New Offensive Against Donbass
YesterdayActor Seth Rogen Mocked Online For Downplaying Crime in Los Angeles