For All His Faults “Farage’s Campaigns Have Had Merit” - Politician 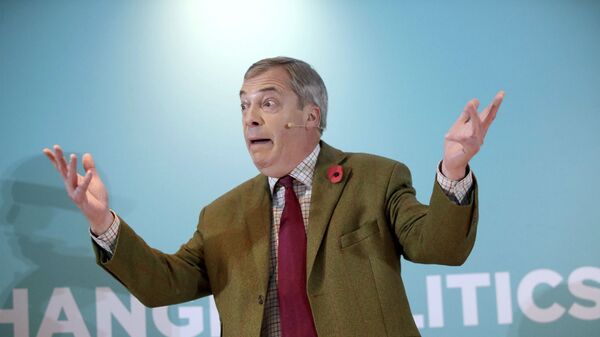 © AP Photo / Danny Lawson
Subscribe
International
India
Africa
Brexit Party leader Nigel Farage has been criticised on the BBC show Question Time with an audience member accusing him of using the EU as a gravy train during his time as an MEP. Chris Mendes, leader of the Foundation Party, reflects on whether the accusations such as these derail the Brexit Party’s prospects ahead of December’s general election.

Sputnik: Do you agree with the criticism directed at Nigel Farage regarding the money he made during his time as an MEP?

Having a group of MEPs who don’t approve of the whole idea of this project, this parliament, and these institutions, these powers that they are taking more and more away from member states and centralising at the European level, there needs to be some opposition to that.

For all of the faults of the various Brexit campaigns over the years, they have many merits and one thing that they have done very well indeed, including Farage over many years, is actually to put the issue and the viewpoint of being opposed to the EU, raising it to the surface and bringing it to the attention of so many millions of people, and Farage and his colleagues continue to do that.

Sputnik: Will the Brexit Party pose a big threat to Britain’s major parties as initially predicted?

Chris Mendes: I actually have a few friends inside the Brexit Party, and at a senior level too; and Farage’s actions in recent weeks have been very divisive, I was talking to a prospective MP just last week who happened to not be standing, and the truth is from the inside they are all split, some feel withdrawing candidates has been the right move and some don’t.

One of them means actually leaving the EU on terms that we may not be entirely in love with right now, but we can live with it and change them later on if need be, or Jeremy Corbyn, which means a second Brexit referendum and another remain campaign, do we really want to fight another referendum again?

Those are the two directions of travel right now, and the public must pick one. If you are a Brexiteer and want us to leave and move on; you have to hold your nose and back the Conservative Party, let them get it done and we can get Brexit done and move on.

Sputnik: How do you see December’s general election panning out?

Chris Mendes: Jeremy Corbyn is self-evidently incapable of leadership, he’s essentially a hostage within his own party on the subject of Brexit, he has struggled with Brexit from day one, it was his very first leadership test and he allowed himself to become hostage and subsequently campaigned for remain, and now he’s had to pledge a second referendum, and his is a lifelong Eurosceptic we are talking about.

Corbyn has failed to get the anti-Semitism under control within his own party, and a strong leader would never ever let that get so wildly out of control as it has done, he holds exactly the same fantastical, utopian, hard-left economic views as he did when he left school, and he’s also very bad-tempered, he can’t even remain calm on TV for five minutes, let alone being Prime Minister for five years.

This is somebody who’s been presented to us as a candidate for Prime Minister, but he has absolutely no chance of winning, if he can’t come to a simple position of honouring the biggest democratic mandate in the history of this country whilst being unable to manage his own party; he has absolutely no business whatsoever filling out a job application for being Prime Minister.