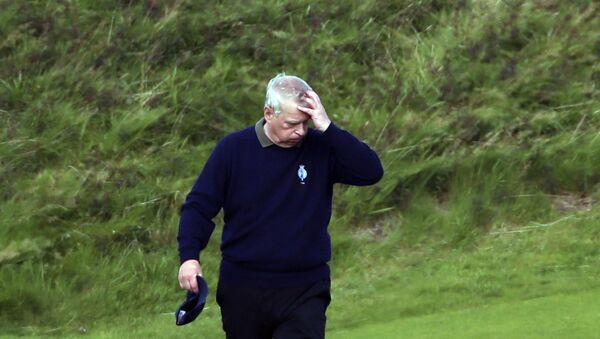 Finian Cunningham
All materials
Britain’s Prince Andrew’s “car crash” interview about his friendship with paedophile billionaire Jeffrey Epstein has provoked a storm of public criticism of the monarchy like never before.

The arrogant and aloof Andrew was hardly apologetic over his dodgy shenanigans with the convicted trafficker of underage girls, Epstein, whose leisure it was to ply his rich and famous friends with sex parties.

The British prince claims he did not partake in any of the criminal licentiousness that Epstein was notorious for.

But those tenuous denials have come back with a vengeance against this royal member. And not just the nearly 60-year-old Andrew, younger brother of heir to the British throne, Charles. The British public are incensed by what they see as a bloated, antiquated monarchy which is living off the increasingly hard-pressed taxpayers.

Britain’s inequality between super-rich and ordinary struggling working people is off the charts. So too are numbers of homelessness, child poverty, hunger and social breakdown. And yet here we have a royal toff flying around the world for pleasure trips which he seems to have no awareness of as being wrong.

Even normally “true-blue” media outlets like The Daily Mail and The Sun have this week been homing in on public disgust over Prince Andrew and his feckless billionaire-party-boy-image.

The Sun reported on former security aides to Andrew who claim that he eluded them “for several hours” when he was visiting Epstein in the latter’s mansion in New York City on one trip back in 2001.

LBC radio host James O’Brien this week noted “there is blood in the water” after the disastrous BBC interview by the prince. The British public were waking up to express a more critical view of the royal family and all the mystical deference that goes with this institution.

Why should some individuals be considered above the law just because they are born with a royal title? That’s what the public seems to be increasingly asking.

Clearly, from Andrew Windsor’s evasive and implausible answers about his past behaviour and association with a convicted sex offender, and given the gravity of accusations being levelled by alleged victims, then it is incumbent on the so-called prince to be questioned by prosecutors.

Look at the way Julian Assange is being persecuted and tortured in a British prison over bogus adult-sex charges. Those charges have since been dropped, yet Assange has spent years in detention to face secondary charges for espionage. His only “crime” is that Assange revealed the truth about American and British war crimes in Afghanistan and Iraq and elsewhere.

By contrast, Prince Andrew is being treated with kid-gloves even though the potential case against him is much more serious.

In a fitting twist of fate, however, the louche largesse of this royal is rebounding with sharper public awareness about the whole institutional racket that is the monarchy.

Andrew is reckoned to be on an income of £250,000 a year, donated by his mother, Queen Elizabeth, from her annual funding provided by the taxpayer. Dozens of other royal scions are propped up in their lives of luxury and privilege by hard-working British people – people who are increasingly finding it hard to feed their families, pay for their rents and education of their children.

“Randy Andy’s” excesses and his lordly arrogance are making the British public question the existence and purpose of the monarchy. Who are these freeloaders?

It goes much deeper than that. The mystical deference that human beings are indoctrinated with to show towards other human beings who are supposed to be their superiors, even divinely appointed, is such a ludicrous concept. It is more than ludicrous. It is a deeply sinister form of control over society, which is thoroughly anti-democratic. (And the British government and media have the cheek to lecture Russia about “authoritarianism!)

Andrew Windsor, in his elitist bungling, is an exemplar exposé of the crass venality of the British monarchy and its class system.

But the way things are going down she may be the last line in the British Crown. Inevitably and suitably, the monarchy meltdown all comes down the systematic corruption within, which in turn begets more corruption and eventual downfall.