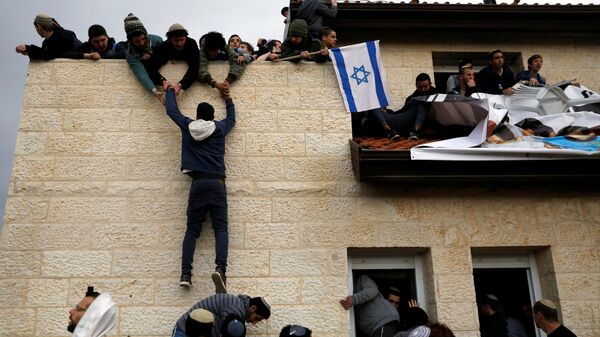 The effective endorsement of Jewish settlements in the West Bank by the United States on Monday became the latest in a string of explicitly pro-Israel moves by the Trump administration.

Mike Pompeo’s bombshell announcement on Jewish settlements has invigorated settler leaders in Israel, who are now calling on their government to annex Palestinian territory.

Oded Revivi, a lawyer in charge of the settlement of Efrat and spokesman for the Yesha umbrella group, has urged Tel Aviv to extend its sovereignty onto the lands.

“Settlement is not a crime and it is not an obstacle to peace,” he said, as quoted by The Times of Israel, adding that US envoy to Israel David Friedman had lobbied for the move.

Yisrael Gantz, chair of the Binyamin Regional Council, which governs 46 Israeli settlements in the West Bank, described the announcement as a “major step toward [Israeli] sovereignty [in the West Bank].”

He similarly called on the government to annex “Judea and Samaria”, as the West Bank is officially designated in Israel.

Secretary of State Mike Pompeo said in a dramatic statement on Monday that the United States would no longer abide by a 1978 State Department legal opinion that Jewish settlements in the West Bank violate international law.

The United Nations, in a number of resolutions, has called those settlements illegal, pointing out that they were set up within territories which were occupied during a war. As much as 138 of the 193 UN member states have recognised Palestinian statehood, including the overwhelming majority of nations in Asia, Latin America, Africa and Eastern Europe. Palestinians, meanwhile, want the West Bank to comprise their future state, and argue that the sprawling Jewish settlements would effectively kill off this plan.

Despite objections from the UN, Israeli Prime Minister Benjamin Netanyahu has long pushed for the establishment of more settlements in those territories, citing historic ties with the West Bank and security reasons, and campaigned on a pledge to annex parts of the West Bank. He said on Monday that the US move “rights a historical wrong” but didn’t reaffirm his annexation promise.

The Trump administration has openly cast doubt on the viability of the two-state solution, which had been the core of American policy on the Israeli-Palestinian conflict for the past several decades, and has made a number of pro-Israel police decisions during the past two years. In a show of support for the Netanyahu government, Trump moved the US embassy from Tel Aviv to Jerusalem, thus recognising it as the capital of Israel, and declared the disputed Golan Heights as part of the Jewish State.

The new American policy has raised more questions about the success of Trump’s plan for peace between Israel and Palestinians, which includes a series of economic and political measures, but excludes a two-state solution.