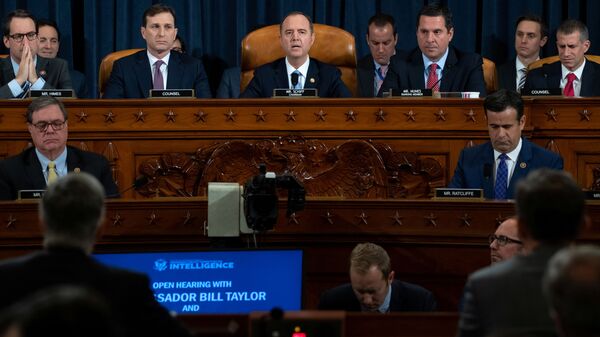 The US House Intelligence Committee late on Monday released the testimonies of David Hale, the Under Secretary of State for Political Affairs, and David Holmes, a State Department official now based in Ukraine, who is scheduled to give public testimony later this week in the ongoing impeachment inquiry against US President Donald Trump.

According to the declassified deposition, Holmes told House investigators last week that during a 26 July phone conversation Trump asked Gordon Sondland, the US ambassador to the European Union, for an update on "the investigation". The US envoy responded that Ukrainian President Volodymyr Zelensky would give Trump what he wanted.

"I think the Ukrainians gradually came to understand that they were being asked to do something in exchange for the meeting and the security assistance hold being lifted", David Holmes said during the deposition.

David Hales testified that it became “more and more obvious that this was an unusual set of things that were happening” and that Trump lawyer Rudy Giuliani “was involved”.

In particular, in late March, US Secretary of State Mike Pompeo spoke with Giuliani about Ambassador Marie Yovanovitch. After those calls, the State Department maintained its decision of not issuing a statement in support of her, the declassified deposition said

Trump earlier criticized Yovanovitch's diplomatic work in a series of threatening tweets, saying "Everywhere Marie Yovanovitch went turned bad" and adding that he had the right to fire Yovanovitch.

Yovanovitch testified before the House Intelligence Committee last week as part of the first public hearings in the impeachment inquiry led by House Democrats. She also testified in a closed-door hearing in October.

US prosecutors have meanwhile opened a federal investigation into whether Trump lawyer Giuliani stood to personally profit from an energy project in Ukraine that two of his associates - Lev Parnas and Igor Fruman - promoted. The two purported businessmen told Ukrainian officials that the Trump administration supported a pipeline project while also allegedly pushing them to open a probe into former US Vice President Joe Biden and his son Hunter.

In October, US federal prosecutors unsealed an indictment against Parnas and Fruman and two others - David Correia and Andrey Kukushkin - for funneling $1 million in political donations from foreign nationals to unspecified political campaigns in the United States.

The four men are also accused of funneling money to an as-yet-unnamed member of Congress and then pressing the lawmaker to remove or recall the then-US ambassador to Ukraine, Marie Yovanovitch.

During meetings with Ukrainian officials last year, Parnas and Fruman reportedly pitched the idea of a project to build a natural gas pipeline from Poland to Ukraine.

A whistleblower has alleged that Trump pressured Ukrainian President Zelensky to investigate potential corrupt activities by former Vice President Joe Biden - Trump’s rival in the 2020 election - and his son Hunter Biden, in exchange for providing previously allocated cash for US military aid.

Trump declassified what is claimed by the White House to be the full transcript of his conversation with Zelensky, saying there was no quid pro quo, and characterizing the impeachment inquiry as a political witch hunt by Democrats who seek to reverse the result of the 2016 US presidential election.