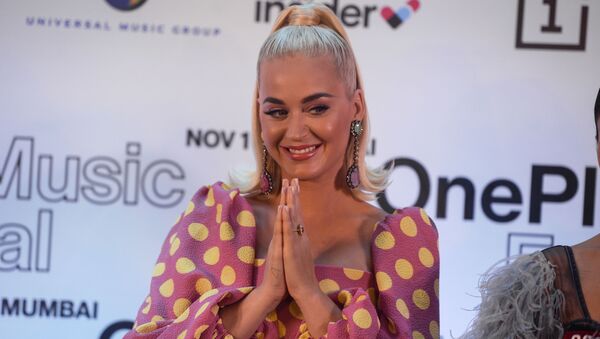 New Delhi (Sputnik): International pop-star Katy Perry was well received by fans on her recent trip to India but may have messed things up right at the end of her visit, according to social media users.

A video showing Katy along with members of her entourage walking past airport security, without showing their passports in Mumbai Chhatrapati Shivaji Airport has surfaced on social networking platforms in India.

Netizens who witnessed the viral video have slammed Katy for being “disrespectful” and “rude” towards the law of the country.

@katyperry no matter how big star you're, You should respect the immigration laws of India. & that immigration officer didn't say anything & showed utmost respect towards you because of your stardom but don't take advantage of this. #respectAll https://t.co/I9UrldAWyM

#katyperryindia The singer looked dazed and blank when asked to show passport by Indian airport staff twice...and did not show it.Her Entourage member is seen placating the guy.Horrible...can anyone from our world even try this in America?Shameful.Brat! https://t.co/V630bS7hCf

#KatyPerry will not show her passport at Mumbai airport!
But,
Will remove her shoes, hat, earphones at Los Angeles airport..🤔

u just broke the security protocol at the mumbai airport.
when u r in a different country atleast have the manners to obey the law

@katyperry You did an event in Mumbai.....But why didn't you get time to show your passport to security officer at Mumbai Airport? ....No artist is bigger than the rules.....Rule is the rule... Why not call it the ego of fame?......Why take such law-abiding people back to India?

Katy, who is otherwise known for her fondness for India, has not reacted to the attacks.

The singer, along with international pop-sensation Dua Lipa was in Mumbai to perform at a music festival hosted by Chinese smartphone-maker OnePlus on Sunday.