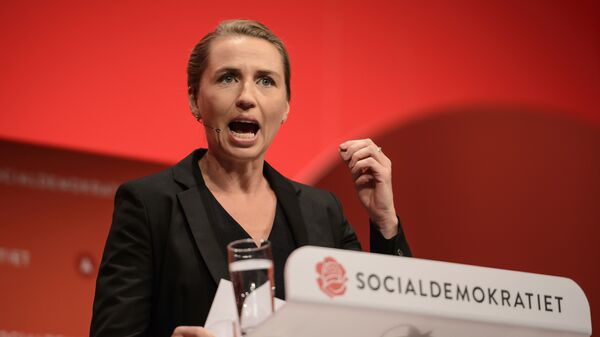 While lauding NATO as the pinnacle of Europe's stability, Mette Frederiksen lamented the recent changes within the alliance, which she attributed to the US “moving away from Europe.”

“I don't want to delve into the choice of words. But the basic analysis that NATO is challenged, has, I believe, some merit to it”, Frederiksen, the leader of Denmark's Socialist Democrat party that broke the dominance of liberal-conservative of Venstre Party earlier this year, said, as quoted by the newspaper Jyllands-Posten.

At the same time Frederiksen emphasised that NATO cooperation is, from the Danish viewpoint, the most important security policy. Much like the French leader, Frederiksen admittedly saw no alternative to NATO, be it for Europe, or the US itself.

“It is the NATO alliance that has brought us all the security and stability that has characterised the post-war era, and that is why we need to maintain the strong alliance with the US”, Frederiksen said, suggesting that the Americans were “moving away from Europe” in some areas.

Mette Frederiksen agreed with Macron in that NATO cooperation has changed, while also taking a poke at US President Donald Trump, with whom she had a beef earlier this year over Greenland, a part Danish territory that he had proposed buying from Copenhagen.

“We are challenged in the cooperation with the US, because the predictability between Europe and the US has changed with the US president,” Frederiksen said.

The Danish leader inadvertently echoed Trump's perennial talking point about Europe assuming a stronger defence responsibility. Denmark was repeatedly criticised by the Trump administration for failing to comply with NATO's stated goal of reaching a defence expenditure of 2 percent of the GDP. Copenhagen is currently stuck at 1.35 percent, yet has pledged to boost its spending to 1.5 percent.

“Europe must assume greater responsibility for our own security and the security around us. I'm positive we should do it”, Frederiksen said. “You won't hear me questioning the basic idea of NATO, or the need for a strong alliance across the Atlantic,” the prime minister said.

Earlier this month, the French President shared his outlook in a lengthy interview with The Economist, where he lamented what he called a complete absence of coordination between Europe and the US on strategic decisions within NATO.

In 2017, Macron suggested forming a new defence alliance outside of existing structures, such as NATO and the EU's defence arm. The European Intervention Initiative (EI2) was subsequently joined by 14 European countries, including Sweden and Finland, which formally pursue a policy of non-alignment.

Despite Macron’s repeated efforts to maintain a tight relation with the US, his comments were widely interpreted as a resurgence of the Gaullist push to withdraw from NATO. German Chancellor Angela Merkel, a key ally of Macron, distanced herself from his “drastic” words.

Macron's comments were also treated with considerable unease in eastern Europe, which is increasingly dependent on the US for its security. Macron's interview sparked concerns in Poland and the Baltic States, where his comments were interpreted as a “dangerous signal.”