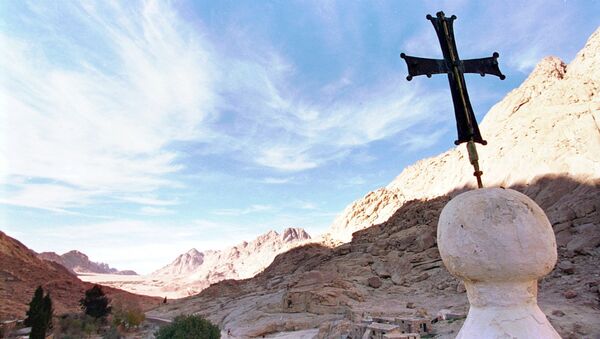 © AP Photo / Enric Marti
Subscribe
International
India
Africa
Svetlana Ekimenko
All materialsWrite to the author
Biblical Mount Sinai, one of the most important sacred places in the Jewish, Christian and Islamic religions, is the mountain at which the Ten Commandments were given to Moses by God. Its exact location has been shrouded in mystery, as modern scholars still differ as to its geographical position.

Bible scholars of the Doubting Thomas Research Foundation (DTRF) have revealed pictures of what they claim is the “proto” Hebrew language found at the site where it is believed that God met Moses.

Jabal Maqla, described as either a peak on the mountain range of Jabal al-Lawz or as an independent mountain, stands 8,460-foot tall and is known as the "mountain of almonds," located in northeast Saudi Arabia near the border with Jordan.

DTRF experts have sensationally pronounced the site to be the Biblical mount Sinai’s real-life counterpart in their 25-minute film on YouTube.

On their website, they have released a series of pictures of what they claim are ancient Hebrew inscriptions found at the site — including what they suggested could be the oldest inscription of a Menorah.

The scholars believe the presence of these inscriptions is proof that there were speakers of early Hebrew in the area the time.
According to researchers of the DTRF, Dr Miles Jones, a historical linguist, examined the photographs and said they are believed to be “proto-Hebrew”.

The scholars of the non-profit claim the inscriptions can be dated back to around the time the Exodus is said to have occurred, with the texts appearing to refer to “Yahweh” — the Hebrew name for God.

Besides the inscriptions, there are also pictures of what looks like murals of footprints inscribed on some of the rocks.
DTRF experts speculate that these footprint inscriptions could be a marking of their territory as the Israelites travelled amid the Exodus.

It is said God told the Israelites:

The organisation also cites Dr Sung Hak Kim who claims to have found the earliest known inscription of a Menorah.

Dr Sung showed the inscription which appears to show lamp carved onto a large rock - a symbol of Judaism since ancient times, with DFTR scholars arguing this may be the oldest ever depiction of one.

All of these inscriptions appear to suggest to the DFTR that their assessment of the site in Saudi Arabia as being Mount Sinai is accurate.

Doubting Thomas Research Foundation experts also say that cave paintings of calves around Jabal al-Lawz match up the with the Bible story of the golden idol.

Scholars believe there is a “massive ancient graveyard” near the mountain, where the calf worshippers would have been buried after they were executed in the Bible.

Ruined ancient structures on the site are suggestive of what may have been the “12 pillars” described in the Bible. 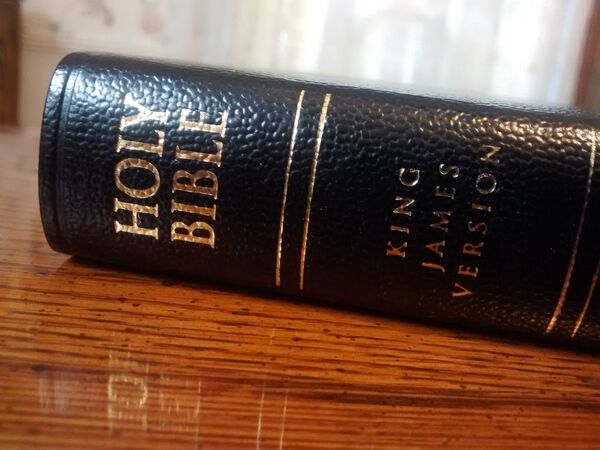 Fences have been set up around the mountain by the Saudi authorities marking it as an archaeological site, with their own experts dismissing claims that Jabal al-Lawz could be Mount Sinai.

DTRF scholars have now established The Sinai In Arabia project to urge the Saudi authorities to preserve the sites for further investigation.

Jabal al Lawz has previously been suggested as a candidate for the original Mount Sinai, with the claim criticised by other historians.
Creationist researcher Gordon Franz dismissed the claim that Mount Sinai is in Saudi Arabia, insisting in a number of his research papers and the article “Bible and Spade”:

“There is no credible historical, geographical, archaeological or Biblical evidence for the thesis that Mt. Sinai is at Jebel al-Lawz in Saudi Arabia.”