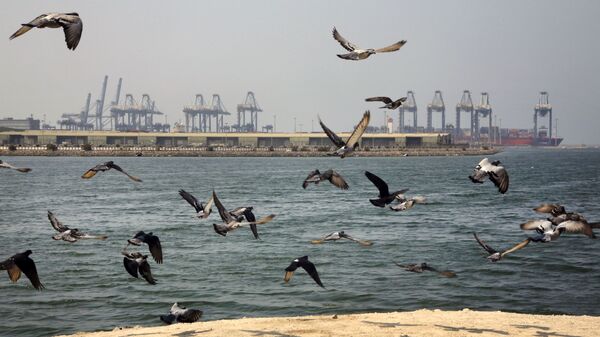 Ilya Tsukanov
All materialsWrite to the author
The waters surrounding the war-torn state of Yemen have seen numerous incidents in recent years, including repeated attacks on Saudi-led coalition naval forces by the Houthi militia.

Yemen's Houthi militia have confirmed that they've seized a vessel in the Red Sea, and said that the ship will be released if it is confirmed that it belongs to South Korea, Reuters has reported.

On Monday, Mohammed Ali al-Houthi, a Houthi leader, tweeted that the group's 'coast guard' had seized the vessel, and would release it following the completion of legal proceedings related to the violation of Yemen's territorial waters. Al-Houthi said the safety of the crew had been assured.

Earlier, the Saudi Press Agency reported, citing a Saudi-led military coalition spokesman, that the militia had hijacked and seized a vessel towing a South Korean drilling rig in the Red Sea on Sunday night. According to some reports, the vessel was the Saudi-flagged Rabigh 3 tugboat.

Rabigh 3 is the name of the ship which has been hijacked by Houthis. See photo below#SaudiArabia #Houthis pic.twitter.com/PpI4ubBnnU

The seizure was said to have taken place in the Bab el-Mandeb Strait, separating southwestern Yemen from Djibouti. The coalition spokesman said the Houthi attack threatened 'vital shipping routes' used to ship Middle Eastern oil and Asian goods to Europe.

Saudi Arabia and a coalition of mostly Gulf allies began a military intervention in Yemen in March 2015 in a bid to return President Abdrabbuh Mansur Hadi to power after he fled the country in January of that year amid large-scale protests. Over the past four years, despite US support, the coalition has failed to defeat the Houthis, a local Shia militia group, and the militia has retaliated to coalition attacks by launching drone and missile strikes at targets inside Saudi Arabia itself. This includes the large-scale attacks on two Saudi oil facilities in September, which temporarily disrupted about half of the kingdom's energy production. Before that, the Houthis regularly launched drones and missiles at coalition bases, airports, power facilities and population centres.

The war in Yemen has caused a massive humanitarian crisis, and caused the deaths of up to 91,000 people, including tens of thousands of civillians. Iran, whom Saudi and US officials have repeatedly accused of assisting the Houthis, has expressed readiness to mediate the conflict, but has denied claims that it supports the militia militarily.