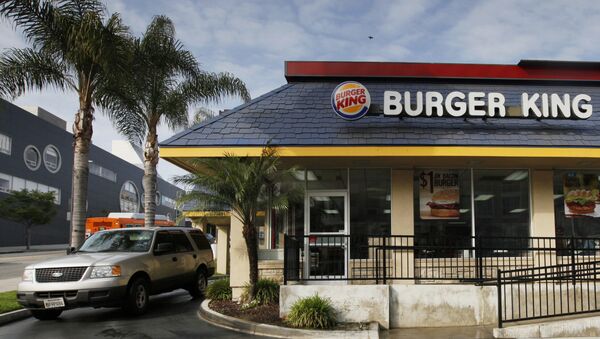 © AP Photo / Nick Ut
Subscribe
Burger King's Impossible Whopper, which quickly became the fast-food chain's most successful launch and has been positively received by vegans and vegetarians alike, will see the release of three more sandwiches using the plant-based patties in 2019.

A group of vegans launched a lawsuit against Burger King for an alleged blunder by the fast food company in their manufacture of their new Impossible Whopper, according to Fox News on Monday.

The suit was launched by Phillip Williams over allegations that the restaurant's cooking methods use the same equipment to cook the vegetarian burger that is used for the meat-based burgers.

Williams, a self-described vegan, claimed that the plant-based Impossible Whopper is contaminated by meat byproducts due to the practice of cooking it on the same grill as beef sandwiches, TMZ reported.

According to Williams, a consistent customer of the vegan Whopper in Atlanta, Georgia, vegans are outraged by any practice which leads to the meat contamination of a vegetarian burger.

Some Twitter users accused "whiny protestors" of attempting to stop the production of the Impossible Whopper.

@BurgerKing yall should've realized #vegans are whiny protesters that sue over everything. It was only a matter of time. Just get rid of the Impossible Whopper and tell them to go eat somewhere else and sue someone else. #Vegan #LiberalismIsAMentalDisorder #vegetarian #MondayMood

Others suggested that it was inconsistent for vegetarians to demand food options and then to sue the chain.

The name is the place is Burger King....NOT Vegan King..... You know if you go to a meat place to get a non-meat protect that there will be residue.

Alternative eaters want to complain that there is not enough food options but then go and sue a chain … https://t.co/wfbID6QQ9z

Some asked why a vegan would  want to eat at a Burger King.

Vegans are literally suing Burger King over concerns that the impossible whopper share the same grill as meat.

Why are y’all even eating at Burger King if you’re about your health though?

Burger King has warned customers that the 'vegan' label does not carry over into how the burger is cooked, in this case, an "open kitchen environment". The fast-food company noted that customers can request their burgers be cooked in an oven, separate from meat-based products.

Burger King previously faced a backlash after customers noted that they had been served beef patties instead of the vegetarian impossible burger.

000000
Popular comments
Not to mention the human DNA in the veggieburgers and hamburgers.
Putinlover
19 November 2019, 00:41 GMT
000000
Why would a vegan even consider stepping inside a Burger King? Why would anyone, for that matter? I went to one once, never again. Dreadful service and very poor value for money.
Medvezhonok
19 November 2019, 01:03 GMT
000000
Newsfeed
0
New firstOld first
loader
LIVE
Заголовок открываемого материала
Access to the chat has been blocked for violating the rules . You will be able to participate again through:∞. If you do not agree with the blocking, please use the feedback form
The discussion is closed. You can participate in the discussion within 24 hours after the publication of the article.
To participate in the discussion
log in or register
loader
Chats
Заголовок открываемого материала
Worldwide
InternationalEnglishEnglishMundoEspañolSpanish
Europe
DeutschlandDeutschGermanFranceFrançaisFrenchΕλλάδαΕλληνικάGreekItaliaItalianoItalianČeská republikaČeštinaCzechPolskaPolskiPolishСрбиjаСрпскиSerbianLatvijaLatviešuLatvianLietuvaLietuviųLithuanianMoldovaMoldoveneascăMoldavianБеларусьБеларускiBelarusian
Transcaucasia
ԱրմենիաՀայերենArmenianАҧсныАҧсышәалаAbkhazХуссар ИрыстонИронауОssetianსაქართველოქართულიGeorgianAzərbaycanАzərbaycancaAzerbaijani
Middle East
Sputnik عربيArabicArabicTürkiyeTürkçeTurkishSputnik ایرانPersianPersianSputnik افغانستانDariDari
Central Asia
ҚазақстанҚазақ тіліKazakhКыргызстанКыргызчаKyrgyzOʻzbekistonЎзбекчаUzbekТоҷикистонТоҷикӣTajik
East & Southeast Asia
Việt NamTiếng ViệtVietnamese日本日本語Japanese中国中文Chinese
South America
BrasilPortuguêsPortuguese
NewsfeedBreaking
11:15 GMTFloods in India's Kerala: Rescue Team Finds Bodies of Mother-Son Hugging Each Other in Debris
11:06 GMTChina May Boost Accuracy of Its Hypersonic Weapons Via AI Technology, Report Says
10:40 GMTReady Player One? Facebook to Hire Thousands of Europeans to Help Create a Metaverse
10:31 GMTRegional Capital of Ethiopia's Tigray Reportedly Hit by Airstrikes
10:28 GMTSouth Korea Worried About Japan's Looming Radioactive Water Dump
10:21 GMTMan Arrested For Making Death Threats Against Labour MP Days After Murder of David Amess
09:52 GMTChuck Schumer Suggests Using Sniffer Dogs to Compensate For Potential Staff Shortages at Airports
09:37 GMTUS Allies Look Askance at Biden Administration's Foreign Policy, Report Suggests
09:32 GMTSnowden Criticises Telegram for Not Deleting His Fake Account
09:27 GMTCases of Psychosis on Rise in England Amid COVID Pandemic
09:23 GMTChina Denies Testing Nuclear-Capable Hypersonic Missile, Says It Was Space Vehicle Trial
09:04 GMTFirst String of Nord Stream 2 Pipeline Filled With Technical Gas
08:51 GMTTen Years After Shalit's Release, Chief Campaigner Talks About Battle to Bring IDF Soldier Back Home
08:22 GMTTorch Lighting for Beijing 2022 Winter Olympic Games Held in Athens
08:18 GMTDenmark to Built World's Tallest, Most Powerful Wind Turbine
07:56 GMT'Mother of Cringe': Twitterwhirl After Greta Thunberg Strikes a Lighter Note at Climate Concert
07:55 GMTBitcoin Surpasses $62,000 For First Time Since April
07:34 GMTTurkey Can Purchase Russia's Su-35, Su-57 Fighters If US Does Not Sell F-16, Official Says
07:22 GMT'Like a 150-Year-Old Museum': Sweden Finds Well-Preserved 19th-Century Cargo Ship
07:13 GMTChina's GDP For First Three Quarters of 2021 Grew 9.8% Year-on-Year