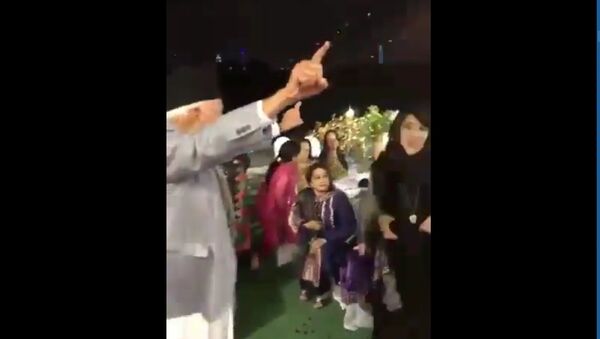 New Delhi (Sputnik): Kashmiri politician Farooq Abdullah, an elected Member of Parliament, has been under house arrest since the Indian parliament revoked the special status of Jammu and Kashmir in early August. It is alleged that he has been detained as a preventive measure amid fears over the law and order situation in the state.

Gathering in support of their fellow parliamentarian and Kashmiri politician Farooq Abdullah, various opposition parties on Monday unanimously demanded the Indian government should allow him to attend the ongoing Winter Session, as is his constitutional right as a Member of Parliament.

The protest was witnessed on the first day of the Winter Session of the Indian Parliament.

Abdullah, the Kashmir’s political party National Conference chief, “charged with disturbing public order”, has been allegedly held at his house in Kashmir under the country’s Public Safety Act.

Just as the Winter Session commenced, Trinamool Congress (a regional party) MP Saugata Roy shouted: “Dr. Farooq Abdullah is not here.” He was soon joined by other opposition parties. "Either instruct the government to release him or the Home Minister should make a statement in the House," Roy added.

Responding to the flurry of questions and demands, Om Birla, the speaker of lower house of the Indian parliament, reminded the House that “when India’s Home Minister Amit Shah informed the House, in a previous session, Mr. Abdullah was not under detention, he was technically correct."

Addressing the House’s Speaker in the parliament, Adhir Ranjan Chaudhary, the leader of country’s principal opposition party Congress, said: "It has been 108 days today since Farooq Abdullah-ji was detained. ‘Yeh kya zulm ho raha hai’ (what kind of injustice is happening)? He should be brought to the Parliament. It is his constitutional right," he added.

Pacifying the disgruntled legislators, the Speaker said: "I am ready to discuss all issues. Please go to your seats... This House is not for sloganeering but for debates and discussions.”

Legislators protested both inside and outside the Parliament building.

Similar demands were made for other political leaders of Kashmir, such as Omar Abdullah, son of Farooq Abdullah; and Mehbooba Mufti, leader of the People’s Democratic Party. All three leaders have served as the Chief Minister of Kashmir, and all three have had their movements restricted.

The Winter Session of the Indian Parliament will last from 18 November until 13 December. Important Bills such as the Citizenship Amendment Bill – concerning granting Indian citizenship to specific migrants – are likely to be introduced in this session.