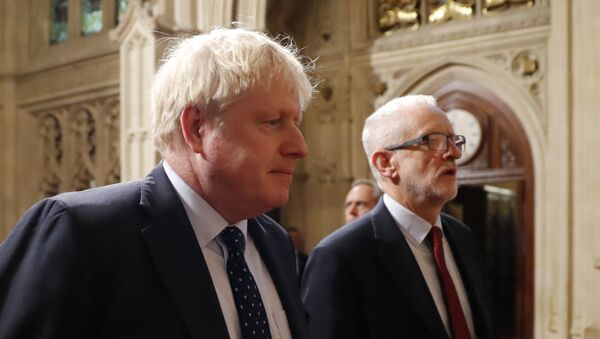 Oleg Burunov
All materialsWrite to the author
Earlier this month, UK Labour Party leader Jeremy Corbyn stated that he had unilaterally made a decision to support London’s drive to hold the 12 December general election, adding that he told his shadow cabinet dissenters that discussions on Brexit are over.

Almost three times as many Britons believe that Boris Johnson is a better choice for UK Prime Minister than Labour Party leader Jeremy Corbyn, a survey revealed on Sunday.

According to a Survation poll conducted for ITV’s Good Morning Britain, at least 47 percent of respondents insisted that Johnson was the best person for the job, while just 17 percent supported Corbyn.

15 percent more claimed that Lib Dem leader Jo Swinson was the best candidate for the job.

Additionally, the poll revealed that the Conservative Party is leading with 42 percent of support, while Labour and the Lib Dems hold second and third positions, with 28 and 13 percent respectively.

The survey comes after Corbyn told The Guardian earlier this month that his unilateral decision to back UK Prime Minister Boris Johnson’s election plan flew in the face of opposition from several colleagues, including Labour’s chief whip Nick Brown.

“I put it to them quite clearly: I said, our objections are now gone. We are now supporting a general election – and everybody gulped. I didn’t alert anybody in advance – it was my decision. On my own. I made that decision. And they gulped, and said, Yes Jeremy,” Corbyn added.

According to him, the election is all about “the future of this country, the environment and the cohesion of society.”

Corbyn also made it plain that he will refrain from launching attacks on Johnson because “doing personal doesn’t work.”

The interview came as Johnson urged Britons to vote for the Conservatives during the forthcoming elections and get Brexit done or otherwise get Corbyn.

“The risk of voting for any other party — and I’m afraid it is ANY other party — is you just get Jeremy Corbyn and the Labour Party or a chaotic coalition led by Corbyn,” Johnson told the Sun.

He claimed that Corbyn offers an outdated vision for Britain, describing the Labour leader as a “fossil” coming from “the Marianas Trench of politics.”

Earlier, the Labour Party officially launched its campaign for the 12 December general election, with Corbyn lambasting the US President and the current British government's relationship with him and claiming that “Donald Trump is trying to interfere in Britain’s election to get his friend Boris Johnson elected”.

The snap general election was approved by the UK Parliament's House of Commons late last month, a day after Brussels approved another deadline extension for the UK, giving the country until 31 January, 2020 to ratify the Brexit deal negotiated by Johnson.