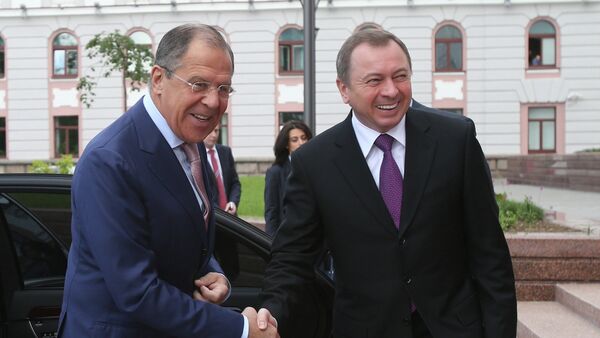 MOSCOW (Sputnik) - The historically allied ties between Moscow and Minsk are expected to reach new heights in the near future, Belarusian Foreign Minister Vladimir Makei said on Monday.

On Monday, Makei paid a working visit to Russia to discuss relevant international and bilateral issues with Russian Foreign Minister Sergey Lavrov. This meeting came amid plans for the two countries to adopt an integration program in time for the 20th anniversary of the treaty of the Union State of Russia and Belarus in December.

"In the near future, relations between the countries should reach a completely new level. As we know, at the instruction of the heads of Belarus and Russia, the countries' governments are actively preparing proposals aimed at deepening the allied integration. These are the issues that will be discussed at tomorrow's meeting of the Council of Ministers of the Union State," Makei said during a joint press conference with Lavrov.

He also added that the prepared documents on the integration stipulated a significant strengthening of economic cooperation.

The strategic partnership between Belarus and Russia is based on close historical and cultural links between both the leadership and people. After the collapse of the Soviet Union, the two nations continued working together within the Commonwealth of Independent States and the Union State of Belarus and Russia. The latter was established in 1999 with the goal of creating a legal basis for integration and unifying some aspects of economic, foreign and security policies while safeguarding the sovereignty of the two countries.