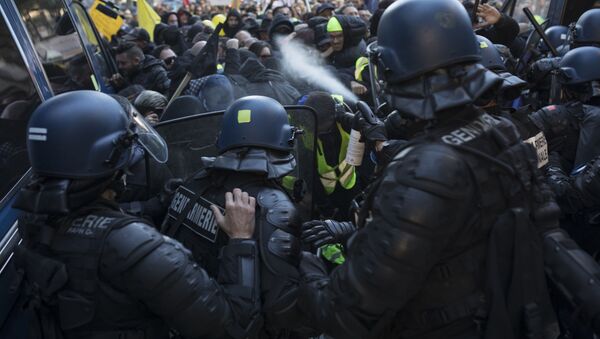 PARIS (Sputnik) - As France marks the first anniversary of now-famous France's yellow vest protests, which left an ever-lasting imprint on the society and politics, the demonstrators are still determined to continue with protests as the government has not heard all their demands.

The anniversary of the movement was marred by scuffles across the country on Saturday. The rallies turned violent in the heart of Paris, with protesters clashing with police officers and the latter resorting to tear gas and water cannon. Over 260 people were detained during the Saturday protests across the nation, while more than 170 were apprehended in the capital, according to the recent data from the Interior Ministry.

France, especially Paris, has been swept by yellow vest protests since mid-November 2018. Started initially as rallies against fuel tax hikes, the protests then grew into a full-scale movement which representatives took to the streets every Saturday. After the government abandoned its plans on raising the fuel tax, protesters continued hitting the streets across France, demanding fewer taxes, wage hikes and even the resignation of French President Emmanuel Macron. 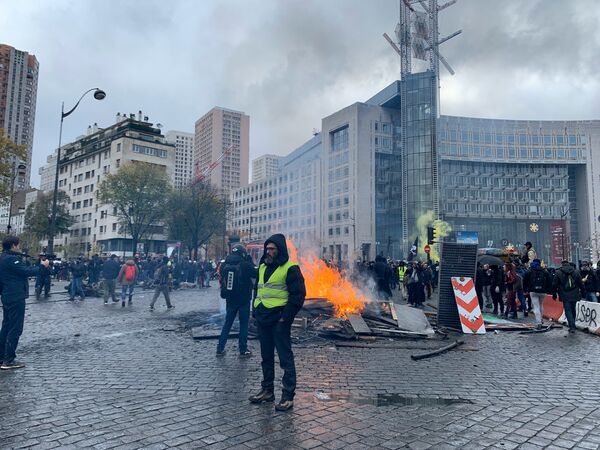 The rallies often ended in violent confrontations between police and demonstrators, with the later hurling stones and projectiles at officers, smashing cars and shop windows and erecting and subsequently burning barricades. Police repeatedly resorted to tear gas and water cannon to disperse the most violent demonstrators. The clashes resulted in numerous injuries, some very severe, among both police and protesters.

Sophie Tissier, from Decla ta manif group (Declare your manifestation) says that Macron has not heard any of the protesters' demands. For example, he ignores the calls to organise a Citizens' initiative referendum, a proposed process that allows the citizens to have their say in proposition or abrogation of laws, she adds.

"He allocated some benefits in January to calm the protests. But in fact, these are just crumbs. And most importantly, he continues his reforms, including a pension system reform. He also continues to reduce family benefits", Tissier said.

Many yellow vests today continue to hit the streets of the French cities to demand the reorganisation of the political system. One of the calls of the protesters is the dissolution of the National Assembly, the lower house of the French parliament, a call, which they continue to make, along with others at the upcoming protests.

"At first we came to the streets to say that there is a lot of poverty and social injustice in the country. But then the yellow vests started saying that there was not enough civilian control of political institutions", Tissier continued.

The protesters continue to call for "tax justice" which is a reduction of taxes on basic food and hygiene products, she said.

Yet, even though not all yellow vest calls were heard, the protests were successful in general, according to Tissier.

"For me [the demonstrations] were a success, in any case, we awakened the consciousness of people who were apolitical, who felt powerless and who tolerated the system without raising their heads", she said.

Meanwhile, the number of participants in demonstrations is decreasing significantly. Roughly a year ago, some 282,000 people joined the marches. This Saturday, only 28,000 people gathered for the demonstrations. 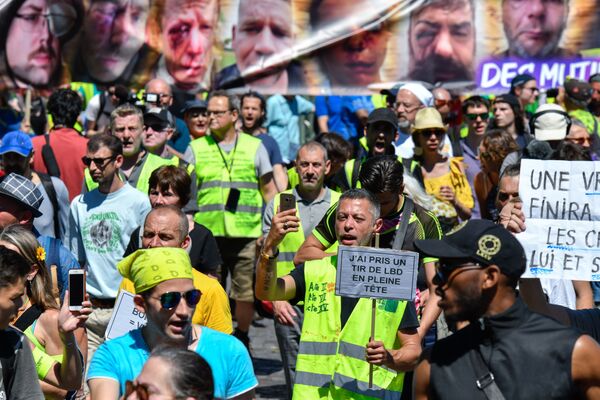 Tissier believes that bans on the demonstrations, as well as and police violence are the reasons for the decline in attendance.

"Of course, there are people who believe that the movement lacks a basic organisation. In addition, we do not have a reliable leader. But in any case, the first reason for the decline in activity is police violence and bans [on the protests]," she says.

The work of police officers is also taking a real hit these days. Eric Roman, the national secretary of the Policiers en Colere (Police in Anger) police union said that officers who were called to constrain the demonstrations also suffered an immense load.

According to him, initially, police officers shared the views of the yellow vests because the rallies raised the problems of the poor.

"But the violence on both sides created a huge chasm", he said.

A year into the protests resulted not only in the decline of the participants but also in the decline of the level of support for the movement. According to opinion polls from December 2019, yellow vests had the support of 70 percent of French citizens. However, in February 2019, more than half of the respondents - 56 percent - voiced their support for the end of the demonstrations.

According to the recent Elabe survey, conducted on the eve of the anniversary of the protests, some 63 percent of the French said they would not like the protests to be resumed, while 27 percent expressed support for the increase in the volume of the movement.