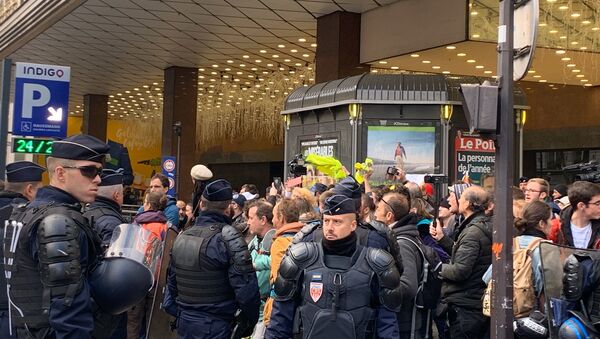 Subscribe
The Yellow Vests' anniversary comes amid new unrest in Paris, as the weekend protesters clashed with the police on Saturday, prompting law enforcement forces to ban the rallies.

Police have allowed the reopening of several metro stations in Paris, including those of Line 1 which serves the Champs-Elysées.

"Unfortunately the movement of the yellow vests has, for a number of months, been gangrened by ultras, people who consider that political violence is legitimate. And in any case, we can not accept it," the government spokeswoman Sibeth Ndiaye told Radio J.

#GiletsJaunes in the Galeries Lafayette to denounce the consumer society on the 1 year anniversary of the movement.#1anDeColere #YellowVests #France #Macron #Acte53
pic.twitter.com/8t1NaoCQwD

According to French Interior Minister Christophe Castaner, 254 people were arrested during clashes in Paris and other cities on the first anniversary of the "yellow vest" movement.

The minister blamed the violence during the rallies on Saturday on "thugs" and "bullies".

During an interview with Europe 1 radio, Castaner said the number of demonstrators stood at 28,600 all across France, while the organisers said that about 40,000 people took part in the rallies.