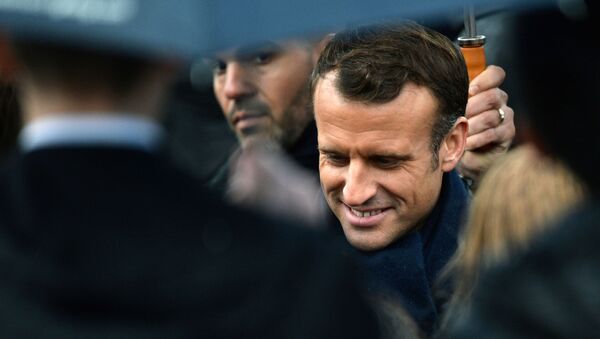 Last year six people were arrested and detained as part of a preliminary investigation over an "ill-defined" project of violent action against French President Emmanuel Macron.

Two men were indicted on 15 November as part of an investigation into an assassination plot targeting French President Emmanuel Macron, reported Le Parisien.

The two suspects, aged 30 and 45 respectively, were arrested Monday in Moselle, northeastern France, with their homes searched.

After being detained by police of the Directorate General of Internal Security, they were indicted for "criminal terrorist conspiracy."
The two are believed to have been part of a plot against President Emmanuel Macron during the commemoration of the centenary of the end of World War I in November 2018.

Four people are already indicted in this case, including Jean-Pierre B., a retiree from Isère presented as the leader of the group.

In November 2018 six people were detained in connection with a suspected “violent” plot against the French president, Emmanuel Macron.

The group reportedly called themselves "the Barjols" in reference to the name given to the French legionnaires deployed in Mali.

The five men and one woman, aged 22 to 62, were seized by France's DGSI domestic intelligence agency, which did not release their identities.

They were picked up by anti-terrorism units in the eastern French regions of Moselle and Isère and the north-west region of Ille-et-Vilaine, officials added.

A source close to the investigation was reported as saying at the time:

“This investigation is looking into a plot, vague and ill-defined at this stage, involving violent action against the president of the republic.”

The main suspect was believed to be Jean-Pierre B., 63, a native of Saint-Georges-de-Commiers, (Isère), who planned to stab the President with a ceramic knife at commemorations for the centenary of the First World War.

Police who discovered the ceramic knife in the suspect’s car reported that, according to the man’s confession, he had intended to pass the security gates as his weapon of choice wouldn’t have triggered the alarm.

The man was apprehended after he was flagged for making threats against the President on social networks and his exchanges were tracked on encrypted messenger sites.

The man was cited by Franceinfo as having shared several messages calling for "a revolution of the people of all social classes of all trades" or "a general mobilisation against the dictatorship of Macron". 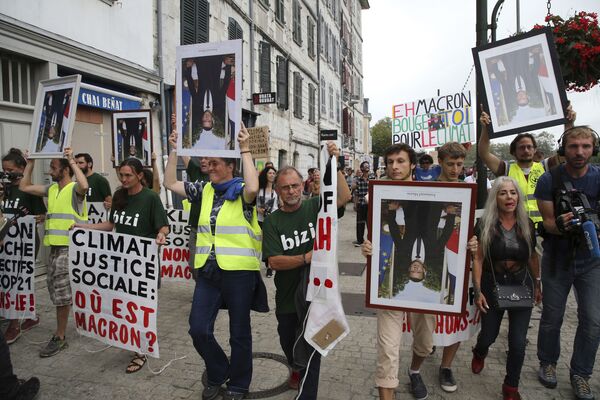 Demonstrators hold upside down portraits of French President Emmanuel Macron during a protest through the streets of Bayonne, France Sunday, Aug. 25, 2019. Critics of French President Emmanuel Macron are marching near the G-7 summit he is hosting to demand he do more to protect French workers and the planet. A melange of activists, some wearing yellow vests, carried portraits of Macron as they marched Sunday through the southwest city of Bayonne. Some held the portraits upside down.
© AP Photo / Bob Edme

The two new suspects indicted on 15 November allegedly played a role in the organisation of the assassination plot.

The 45-year-olds had already been on the radars of police for five common law offences, while the second is unknown.