Oleg Burunov
All materialsWrite to the author
On Friday, South Korean President Moon Jae-in said that it is “difficult” for Seoul to share military intelligence with Japan, referring to Seoul’s previous decision to scrap the General Security of Military Information Agreement (GSOMIA), which expires on 23 November.

Speaking to reporters in Bangkok after his separate talks with South Korean and Japanese colleagues Jeong Kyeong-do and Taro Kono, respectively, on Sunday, Esper added that GSOMIA is “very important” for timely and effective decision-making in case of emergency.

He urged both sides to “take a step forward”, resolve the problem and resuscitate the agreement. 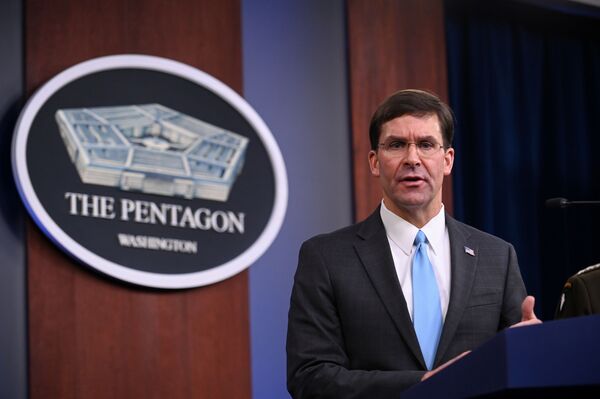 His remarks come a few days after South Korean President Moon Jae-in’s spokeswoman Ko Min Jung said that the president “explained our stance regarding GSOMIA that it is difficult to exchange military information with Japan, which has imposed export curbs on South Korea for security reasons”.

Esper, for his part, stressed during his visit to Seoul earlier this week that GSOMIA is “an important tool by which South Korea, the U.S. and Japan share effective information, particularly in times of war”.

“Expiration of GSOMIA will have an impact on our effectiveness, so we urge all sides to sit down and work through their differences”, he added.

The statement was preceded by The Japan Times citing an unnamed South Korean government official as saying that Seoul’s  position on the termination of GSOMIA has not changed and that the government does not think that scrapping the agreement “would weaken the [South Korean] alliance with the US”.

GSOMIA, which was signed in November 2016, specifically stipulates that South Korea provides Japan with radar data on Pyongyang’s ballistic missiles as well as humanitarian information obtained from North Korean defectors.

Tokyo, in turn, is obliged to give information to Seoul related to DPRK submarines, as well as data from its satellites on Pyongyang’s preparation for missile launches.

Seoul moved not to prolong GSOMIA after the South Korean Supreme Court ordered a Japanese company to compensate former Korean workers conscripted during the colonial period from 1910-1945.

Japan rejected the decision, insisting that all such claims were settled under a 1965 treaty and retaliating with tighter checks on exports to South Korea, citing national security concerns.