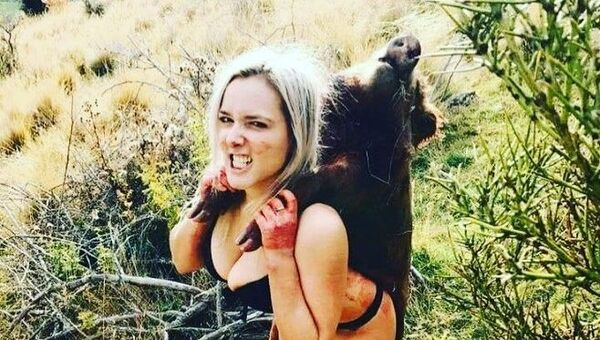 The huntress claimed that she doesn’t take the threats she received to heart, arguing that the people who made them apparently don’t have any hunting experience.

Lucy Jaine, a 29-year old mother-of-three from New Zealand, has apparently found herself facing a stream of threats after posting online photos of herself and her children alongside the remains of the animals she hunted down.

According to the Daily Mail Australia, Lucy defended her lifestyle, arguing that hunting is actually both a good source of organic meat and a good way to get the kids outdoors.

“I’ve had a few death threats from people who just don’t have any experience with hunting. Or maybe they are against animal cruelty. But I don’t take it to heart,” she remarked.

The huntress explained that she started engaging in this activity with her partner Sham, sharing the photos of her kills via Instagram.

“We love hunting and the outdoors. Pig hunting mainly, but we do it all and bring the kids along for the ride,” she added. “I like that we can teach our children how to hunt their own food. The kids love the adventure.”

Some, however, argued online that the photos posted by Lucy resemble “an exercise in self-glorification”.

Lucy Rose Jaine, 29, from #Wanaka #NewZealand🇳🇿, slaughters #Wildlife - she claims... to provide food for her family - However, we can't help but notice those #TrophyHunting #AnimalSelfies are simply an exercise in self-glorification.

If people hunt for sustenance that’s one thing. But the glorification of killing animals is what is the most reprehensible. Selfies, skimpy clothing, hair and makeup and big smiles. Really? It’s almost too shocking to believe.