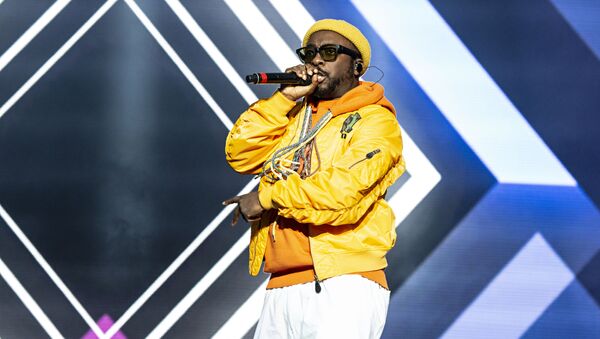 © AP Photo / Amy Harris
Subscribe
In September, two other celebrities found themselves in a controversial situation on an Qantas airline flight. Pop duo the Veronicas were escorted from a plane by police, because they were deemed security risks. The musicians insist they did nothing wrong.

Black Eyed Peas singer Will.i.am has caused a stir on Twitter after he said that he was subjected to racism during a flight from the Australian city of Brisbane to the capital Sydney. The artist, and a coach on the Voice UK, tweeted that he and his group had experienced their worst-ever service due to an overly aggressive flight attendant, who took out all her frustrations on people of colour.

I’m currently on a flight from Brisbane to Sydney.

I’m sorry to say me and my group have experienced they worse service due to a overly aggressive flight attendant...

I don’t want to believe she racist.
But she has clearly aimed all her frustrations only at the people of colour

​Will.i.am, whose real name is William Adams, said the woman called the police on him because he allegedly did not hear a “P.A. due to wearing noise cancelling headphones”. He then tweeted that he did not ignore a safety briefing and did comply with all instructions.

This is how your greeted when you land from Brisbane to Sydney flying @qantas with a #RacistFlightattendant named Lorraine Marshall...She sent the police after me bacause I couldn’t hear the P.A while making beats on the plane wearing noise canceling headphones... pic.twitter.com/9xT7WqTUoO

​The singer’s tweets caused a stir on social media and have received mixed reactions with some netizens saying that incidents of racial discrimination happen quite a lot in Australia, while others said they want to hear the other side of the story.

Discrimination is everyday life in Australia. It's nothing new. Just turn on the TV. But there are some great people in Oz too so dont lose hope!

I want to hear the other side of the story

​Other social media users claimed that the artist is a spoiled celebrity and accused him of playing the race card.

I guarantee this has nothing to do with racisim. It was more than likely a celebrity getting culture shock from being held to the same standards as a regular individual. There's two sides to every story and I am certain the AFP wouldn't have come out without sufficient reason.

​Many users said that the Qantas staff treat all customers poorly and the altercation had nothing to do with racism.

I'm pretty sure its not a race thing and more a passenger thing- they don't like people on their planes full stop. I believe their current mission statement is "Please just pay for your expensive tickets and stay home".

Qantas again. Their flight attendants need to be retrained. First they treat @TheVeronicas like crap for asking for help and kick them off their flight, now they do this to you.

​Others pointed out that the singer had not complied with strict aviation laws and that an Australian pop duo had been kicked off a flight after they put their luggage in the wrong way.

There's a reason QANTAS has best safety record in the world and it is upholding safety procedures, no matter how entitled the passenger thinks they are. Yes! Targeted for not following the instructions, not because of colour - noise cancelling hphones or not. Luv yr music BTW.

​Still others joked that the flight attendant is not a big fan of Will.i.am’s music.

Did she really hate your beats that much? Lol

Maybe she has heard your music. Its criminal

​The singer received backlash for revealing the flight attendant’s name, with people sayting the woman may become the target of abuse. Australian reporter Peter Ford posted a picture of an aggressive message the woman received and said that artist's fans have started attacking her. The singer then urged his fans not to send aggressive messages to the flight attendant.

But mate why not just go though a normal complaint process? Do you understand the intimidation and abuse you are subjecting this woman to with your post?

​Commenting on his decision to reveal the woman’s name, Will.i.am said people are “supposed to call out wrong doings” and that he is using Twitter the same way other people use it to complain about mistreatment. Qantas said it completely rejects the singer's claims that he was subjected to racism.