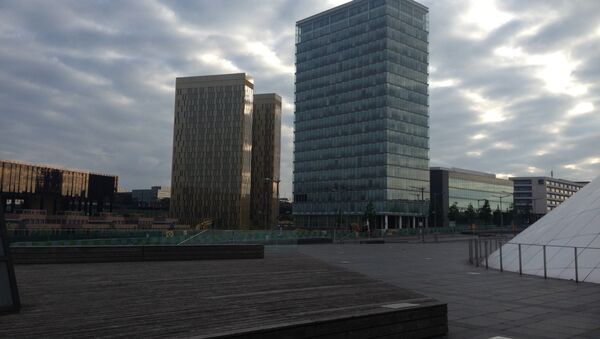 CC BY-SA 4.0 / -wuppertaler / Avenue John F. Kennedy in Luxemburg-Kirchberg
Subscribe
BRUSSELS (Sputnik), Luc Rivet - The European Court of Justice has ruled that the European Parliament "seriously compromised" the principles of impartiality toward the Eurosceptic Alliance for Direct Democracy in Europe (ADDE) political group while ordering it to repay part of EU funds and denied it 501,000 euros ($551,000) in grant money in 2016.

The ECJ delivered a ruling on 7 November in a sign of major victory for the Eurosceptic political forces.

The ADDE was a political group in the EU parliament from 2014-2017 that brought together the UKIP of Nigel Farage, France Arise! of Nicolas Dupont-Aignan, the Belgian People's Party of Mischael Modrikamen, the Sweden Democrats of Jimmie Akesson, Germany’s AfD as well as like-minded Dutch, Czech, Polish and Lithuanian anti-establishment forces.

The European Parliament is administered by a bureau that is strictly composed of representatives of main traditional parties.

In 2016, a bureau member and one of the then-parliament vice-presidents, Austria’s Ulrike Lunacek, de facto launched a war against the ADDE, claiming publicly that the group of Nigel Farage, Nicolas Dupont-Aignan and others had "fraudulently used European funds". The claims were voiced well before any official decision had been made.

The parliament’s bureau ultimately did rule that the ADDE had breached EU spending rules by using European funds on an opinion poll in the run-up to the 2016 Brexit referendum. The poll was conducted in seven EU nations, including the United Kingdom.

Lunacek and her colleagues, therefore, decided to declare the expenditure of 500,000 euros to be ineligible and requested that the ADDE reimburse a sum of 172,655 euros.

In 2017, the parliament bureau ruled to limit the pre-financing for the party to 33 percent of the maximum amount of the annual grant, conditional upon the presentation of a bank guarantee, citing concerns that the ADDE could go bankrupt in the absence of its own resources.

The ECJ, however, found that the "appearances of impartiality were seriously compromised", noting that a member of the bureau, Lunacek, had "prejudged the issue before the contested decision relating to the 2015 financial year was adopted".

The court also found that "only the part of the opinion poll relating to the UK is concerned by the prohibition of the financing of referenda campaigns", while the survey in the remaining six countries had fallen within the European rules.

German, Greek Presidents Note Increase of Euroscepticism in Some Parts of EU
It also concluded that polling was not a "donation to the UKIP".

The ECJ at the same time agreed with the bureau’s decision to demand a bank guarantee and curtail advance payments to the ADDE "in order to limit the financial risk for the EU connected with the pre-financing".

It also turned down the political group’s complaint that there was not a single representative of the Eurosceptic parties in the bureau to ensure its impartial work. The court noted that the body was elected by members of parliament.

ADDE Says ‘Vindicated, but too Late’

Commenting on the ECJ’s ruling, the leader of the Belgian People’s Party, a member of the ADDE and president of its board, stated: "We are vindicated, but too late".

"The bankruptcy of the ADDE was the evident goal of the manoeuvre, led by Mrs Lunacek and her colleagues. They succeeded; our parties were not rich enough to produce a bank guarantee and we simply had to close shop. We liquidated the ADDE", Mischael Modrikamen went on.

Modrikamen noted that the "treatment of the ‘populist parties’ in Europe is a real democratic scandal", accompanied by slander campaigns both at the EU level and in the media, including those organised with the help from the George Soros foundations.

"In the French-speaking part of Belgium, where Prime Minister Charles Michel comes from, there is an official sanitary cordon in place in the press and the political world, never to give the word to parties on the hard Right. It explains that we are one of the few regions in Europe where the Right is not making progress. We are gagged", the politician argued.

Belgium’s Michel, Modrikamen added, has been awarded the top job at the European Council for his very "reputation of having ‘controlled’ the right parties."

A former ADDE secretary-general, Yasmine Dehaene, echoed her colleague by saying that the Eurosceptic group had been "treated unfairly by people who lied impudently."

"At ADDE, we knew of the hatred of the traditional parties in the European parliament. So, we were extremely careful and every penny was justified. We made several polls in different European countries, on issues such as illegal immigration or the pro-Europe feeling in the population, with respected polling institutes, but we were permanently harassed by European parliament employees, whose only task, seeing the time they devoted to our control, was to try to stop us from having any activity", she noted.

"Files are created and press defamation campaigns are orchestrated at national level. It is unacceptable that the European Union and its civil servants benefit from immunity in national courts of law. The EU must be held to account for its illegitimate actions", Lebreton said.

According to the lawmaker, the ECJ ruling "gives us hope that democracy can prevail in the end". He, in particular, noted that "the ‘populists’ now represent 30% of the MEPs in the hemicycle," which means that they "cannot be considered to be mere dissidents" anymore.

Back in 2017, European Commission President Jean-Claude Juncker notably said that the bloc "should not be filling the coffers of anti-European extremists", a warning that did not go unnoticed by many Eurosceptics.