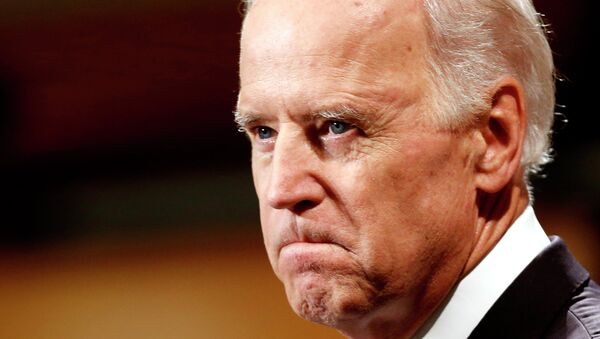 North Korea previously called US Vice President Joe Biden “an imbecile” and “fool of low IQ” in May for calling their leader a dictator and tyrant.

North Korea's official KCNA news agency has launched a tirade against US Vice President Joe Biden in response to his unflattering comments about the country's leader Kim Jong-un.

The news agency likened Biden to a "rabid dog" that will soon pass away and needs to be put down. The media outlet went on to say that the vice president was manifesting the "final stage of dementia".

It is not immediately clear what insult the media is referring to; however, Biden has been on record accusing President Trump of pandering to Kim, whom the former vice president called a "murderous dictator".

"Such a guy had the temerity to dare slander the dignity of the supreme leadership of the DPRK. It was the last-ditch efforts of the rabid dog expediting his death. Rabid dogs like Baiden [sic] can hurt lots of people if they are allowed to run about. They must be beaten to death with a stick, before it is too late", the KCNA stated.

At the same time, the news outlet applauded close personal ties between President Trump and the North Korean leader.

The situation on the Korean Peninsula significantly improved last year after talks between North Korea's Kim and South Korean President Moon Jae-in as well as Trump.

Kim has met with the US president three times: in Singapore last year, in Hanoi in February, and at the demilitarised zone between North and South Korea in June. The Singapore meeting was largely viewed as a diplomatic breakthrough between the two nations, but subsequent meetings have failed to come up with an agreement.

Earlier, in October, the North Korean delegation led by chief negotiator Kim Myong Gil held working-level denuclearisation talks with the US delegation headed by Stephen Biegun in Sweden. However, the North Korean diplomats left the meeting venue prematurely, after which Pyongyang's chief negotiator said the working negotiations with the United States had failed. According to the diplomat, the United States came empty-handed.