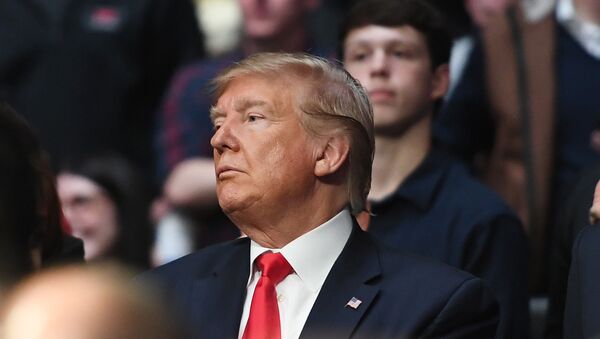 Democrats on the House intelligence Committee called their first witnesses on Wednesday to testify in the first public impeachment hearing against US President Donald Trump. They were hoping to prove the alleged quid pro quo between the Trump administration and Ukraine.

William Taylor, a top US diplomat in Ukraine, and George Kent, a State Department official, had already testified behind closed doors last month, but this time they had a bigger audience - the American public and the world at large.

Taylor, the acting US ambassador to Ukraine and a Vietnam War veteran, did have some new information to share. In his opening statement, he revealed that just last week a member of his staff had overheard a 26 July phone conversation between Trump and Ambassador to the EU Gordon Sondland, in which Trump allegedly asked Sondland about the “investigations”.

Following the call, Taylor’s staff member said Sondland told him that President Trump’s interest in Ukraine was more about investigating the Bidens than Ukraine itself and Trump’s personal lawyer Rudy Giuliani was pushing for it.

The career diplomat also spoke about what he called “two channels of US policy-making and implementation”, a “regular” one and another called “highly irregular”. The “irregular” one included Rudy Giuliani, and acting White House Chief of Staff Mick Mulvaney and ran “contrary to the goals of long-standing US policy”, Taylor said.

In his testimony, Taylor also described his concerns over why the White House withheld $400 million in military aid from Ukraine.

“To withhold that assistance for no good reason other than help with the political campaign made no sense. It was counterproductive to all of what we had been trying to do. It was illogical. It could not be explained. It was crazy”, Taylor said.

George Kent, a deputy assistant secretary in the State Department’s European and Eurasian affairs bureau, testified that there was no evidence that former Vice President Joe Biden acted improperly in his dealings with Ukraine. He said he believed that Biden acted “in accordance with official US policy” in Ukraine.

During the hearing, Kent also said it’s wrong for the US to ask other nations to probe their rivals.

“I do not believe the United States should ask other countries to engage in selective, politically associated investigations or prosecutions against opponents of those in power, because such selective actions undermine the rule of law regardless of the country”, he said.

Dr Kyle Kopko, an associate professor of political science and director of the honours and pre-law programmes at Elizabethtown College, noted that neither Taylor nor Kent’s testimonies had significantly changed the views of Congress or the public on the impeachment proceedings, but it could change as the hearings continue:

“I think, at the very least, this is laying the groundwork to show that the president acted with a political motivation to harm one of his potential campaign rivals”, he said.

Dr Kopko also pointed out that there’s still not enough evidence to get the impeachment through.

“...I'm not convinced, yet, that there is enough evidence to result in a conviction in the Senate”, he explained.

“It may be the case that Democrats are using this as a means of damaging President Trump's credibility as a leader going into the 2020 election, and I see that as being the most likely outcome where they are able to severely damage his candidacy and reduce his likelihood of re-election”, he concluded.

“I hear it's a joke. I haven't watched. I haven't watched for one minute because I've been with the president, which is much more important, as far as I am concerned”, Trump told reporters at the White House after talks with Turkish President Recep Tayyip Erdogan on Wednesday. “This is a sham, and it shouldn't be allowed”, he added.

The next hearing will be held this week on 15 November and former US Ambassador to Ukraine Marie Yovanovitch will give her testimony.