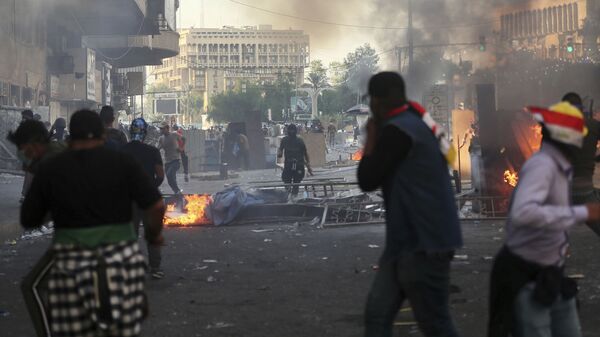 The incident occurred as Iraq is being rocked by anti-government protests, with citizens demanding the government be dissolved and the implementation of crucial reforms.

Six people died and 30 more were wounded after a self-made explosive device blew up at Tayaran Square in the capital of Iraq on Friday.

The Xinhua news agency reported, citing an Iraqi Interior Ministry source, that the blast of a bomb, planted inside a car, occurred close to the famous Tahrir Square, in the centre of Baghdad, where major anti-government protests have been taking place for weeks.

At the time of the blast, a lot of protesters from Baghdad and neighbouring provinces had gathered on Tahrir Square.

#Iraq :Three protesters killed and others injured in an explosion at #Baghdad’s Tahrir Square on Friday night.
Pictures by @YousifAlfahad9 pic.twitter.com/LXhsQskWZn

#Iraq :Protesters extinguishing the fire resulted from a car bomb in Tahrir Square in #Baghdad on Friday’s night. pic.twitter.com/RY0deNMLVf

There have been no further details as to whether the incident is linked to anti-government protests, or if it was motivated by other reasons.

The mass anti-government demonstrations have been underway in Iraq’s capital of Baghdad and several southern areas since October. They have often turned violent and protesters condemned the government forces for attacking them.