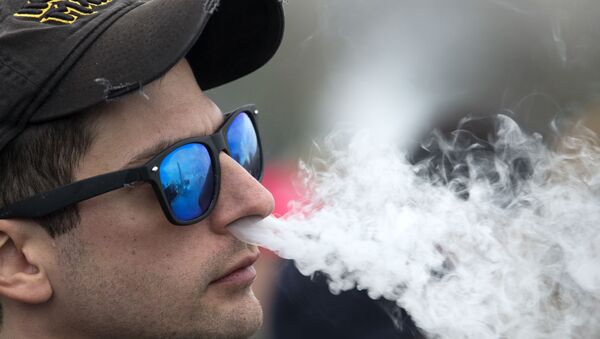 As US federal health authorities urge people to stop vaping due to the rise in vaping-related deaths and illnesses, tech giant Apple has decided to remove all 181 vaping-related apps from its App Store.

Apple’s move, which went into effect Friday, comes after the US Centers for Disease Control and Prevention (CDC) released a report Thursday stating that 42 people across 24 US states died from lung injuries linked to electronic cigarette use. Additionally, more than 2,000 patients have experienced vaping-related illnesses in recent months. Apple told Axios that it has been considering the ban since June.

"Forty-two deaths have been confirmed in 24 states and the District of Columbia as of 13 November,” the agency said in its weekly update on Thursday.

In a statement to Axios, Apple said that it decided to ban apps including vaping-related games or content after the CDC’s Thursday statement. Apple never permitted apps on its platforms that allows users to order vape cartridges; however some apps did allow users to control the temperature and lighting of their devices.

"We take great care to curate the App Store as a trusted place for customers, particularly youth, to download apps,” Apple told the outlet. “We're constantly evaluating apps, and consulting the latest evidence, to determine risks to users' health and well-being."

"Recently, experts ranging from the CDC to the American Heart Association have attributed a variety of lung injuries and fatalities to e-cigarette and vaping products, going so far as to call the spread of these devices a public health crisis and a youth epidemic,” the statement added.

Even though Apple has removed vaping-related apps from its store, users that have already downloaded such apps on their phones will reportedly still be permitted to use them and be able to transfer the apps onto other devices, according to Axios.

The CDC’s most recent statistics come after US President Donald Trump said earlier this week that he plans to meet with medical professionals and vaping industry experts to discuss the rise in e-cigarette related deaths. Several US states, including Michigan, New York, Massachusetts, Rhode Island, Oregon and Montana, have already banned flavored e-cigarettes in light of the rise in lung-related injuries related to e-cigarette use.

The CDC also revealed last week that it found evidence of vitamin E acetate in the lung fluid of patients with lung injuries from e-cigarette use. Although the CDC is still unsure whether or not this substance is behind the vaping-related illnesses and deaths, it can interfere with lung functions when inhaled, the CDC confirmed.