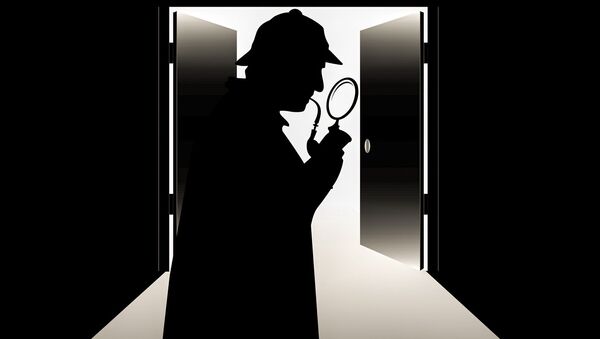 Neil Clark
All materials
This year marks the 160th anniversary of the birth of Sir Arthur Conan Doyle, creator of the legendary detective Sherlock Holmes. In an age where our politics has become increasingly emotionalised (and infantilised), adopting a Sherlockian approach can help us see through the manipulation and the lies.

"It is a capital mistake to theorize before one has data. Insensibly one begins to twist facts to suit theories, instead of theories to suit facts."

Sherlock Holmes to Dr Watson, A Scandal in Bohemia.

Theorising before one has data? Isn’t that exactly what fanatical Russiagate pushers have been doing for the past three years?  Sherlock Holmes would not be at all impressed by those who blame Russia for everything, without any evidence, but it’s not all he would take objection to.

If the master sleuth had been around in 2003 we can be sure he would not have believed the Bush-Blair guff about Iraq possessing WMDs. Logic would have told him that the US and its allies would not have dared to contemplate attacking Iraq, had they genuinely believed there were WMDs there. For why would they do the one thing that would provoke Saddam to use his deadly weapons - which we were told could be assembled and launched within 45 minutes? When the neocons and liberal interventionists want war, we’re expected to suspend logic and believe the unbelievable. Our emotions are played on quite shamefully.

To counter this, as soon as we hear the phrase "Something must be done!", we should reach for our Conan Doyle- and remember the words of Holmes in The Copper Beeches: "Crime is common. Logic is rare. Therefore it is upon the logic rather than upon the crime that you should dwell."

I have copies of the Complete Sherlock Holmes Short Stories and Long Stories on my bedside table and re-visit them regularly.

They’ve been far better guides for helping me understand what is really going on in the world than reading Inside the Tent "experts" spouting forth on international affairs in "serious newspapers."

And so it proved. Gaddafi should have done the opposite: and built up his arsenal. Had he done so his country would not have been attacked- and effectively destroyed as a functioning state- in 2011.

Sherlockian logic has also told me that Iran- precisely because it can hit back and cause some pretty serious damage- won’t be directly attacked- at least not for now. The Empire only attacks the weak.

There are a number of issues where a "Sherlock Holmes" approach would lead us to different conclusions to the ones reached because we are thinking too emotionally (and being encouraged to do so by the power elites).

Take Brexit. This has become a culture war in which critical thinking for a lot of people has gone out of the window. But if we ignore the emotions and stay forensic we can see what’s really happening. While it’s true that some maverick capitalists back Britain leaving the EU, and some do so because they hope the economy will be more deregulated, the most powerful players in the international capitalist system, the big banks, the biggest global corporations, the giants of finance capital, back Remain, which explains why Britain- three-and-a-half years on, still hasn‘t left.

If the powerhouses of globalised capitalism had wanted Brexit, Britain would have been out in 2016.

Cool logic also tells us that there’s something not quite right with the "official" line on the Skripal case. If the unfortunate Dawn Sturgess- the only confirmed death in the saga- really did die of Novichok poisoning, why has her inquest been postponed four times- with no prospective date given at the latest postponement, for it to open?  How could the perfume bottle which is supposed to have contained the Novichok, still be in a regularly emptied bin over three months after the Skripals became ill? As Craig Murray points out, apropos of Sturgess’s death: "Nobody has been charged, no arrest warrant issued and no inquest held". Yet we’re still expected to get all emotional and hold Russia responsible for "killing a British citizen on British soil".

The Conan Doyle story Silver Blaze, about a missing racehorse, does I believe shed more light on the Skripal mystery than anything you’ve probably read so far in Establishment-friendly publications. In a memorable exchange, Sherlock Holmes is asked by Inspector Gregory if there was any other point to which he would like to draw his attention. "To the curious incident of the dog in the night-time", Holmes replies. "The dog did nothing in the night-time", says Gregory. "That was the curious incident," says Sherlock Holmes.

Why, if Russian agents were really responsible for what happened to them, haven’t we heard or seen anything from Sergei Skripal, or his daughter, since last May? Why haven’t we seen CCTV footage of them either on the bench in Salisbury, or of the approach to their house, if indeed Novichok was smeared on the door handle?

Like Sherlock Holmes’s dog that didn’t bark in the night-time, the silence of the Skripals and the lack of CCTV footage speaks volumes

This autumn’s big Establishment-sponsored "suspend critical thought and just emote" is about the Turkish assault on the Kurds in north-east Syria. The line we’re expected to take is that the dastardly Trump, unlike the saintly Obama, has betrayed America’s allies and handed a victory to the "dictators" Erdogan, Assad and Putin. Sherlock Holmes would go "pah" and get out a map.

He'd see that the Turks have been occupying other parts of Syria and there’s been no outcry. He'd note that the very same Islamist militias killing Kurds in 2019, were groups backed by the west when they were fighting the Syrian Arab Army, only then they were called "moderate rebels."

He'd work out very quickly that the "outrage" was all about denying Syria its own oil- and preventing a reconciliation between Syria's Kurds and Damascus- and that the hypocrisy of those saying we must "intervene" against fighters who we've been backing for years, was off the scale. He'd know that the concern over the Kurds from the endless war lobby was synthetic.

They omit an inconvenient fact:

The CIA & Pentagon backed 21 of these 28 militias, and they were celebrated for years in Washington as freedom fighters.

​Behind every western military "humanitarian intervention" is a profit-motive. Once we understand that simple truth, we are not so easily manipulated.

The world would be a much better place if instead of screaming "fascist", "racist" or "Stalinist" at those we disagree with, and allowing ourselves to be divided by ID politics and increasingly vituperative culture wars, we kept cool, reasoned and logical and refused to play the over-emoting game. The neocons, the ‘liberal interventionists’ and the power brokers of the global system, would really hate that.

Rather like Moriarty, Sherlock Holmes is their greatest enemy.