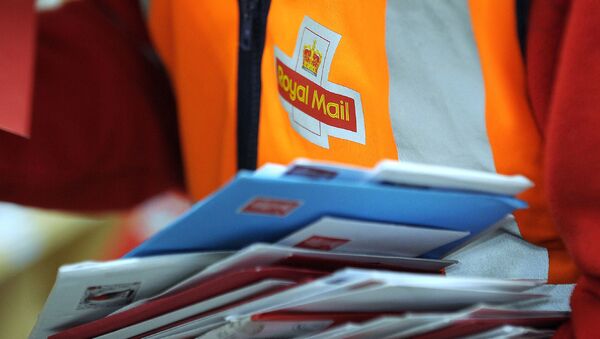 Tommy Sheridan
All materials
The class nature of British society was exposed for all to see in glorious technicolour at the Royal High Courts in London today.

In a matter of minutes a single unelected judge, Lord Swift, granted an injunction sought by the Royal Mail Group (RMG) to nullify a massive industrial strike action ballot conducted by the postal service union, the Communication Workers Union (CWU). Over 110,000 CWU members were consulted in the ballot.

The highest turnout ever recorded in an industrial action ballot was witnessed. An amazing 75.9% of the workers returned their ballot papers and incredibly over 97% voted to strike in support of their union leadership’s recommendation. Yet one single man, representing the British Establishment, overturned the democratically expressed wishes of over 80,000 workers. No wonder the elected CWU leader, Dave Ward, called the decision “outrageous”. The ruling class don’t like to talk about the class war. They are too busy practicing it. The judge represented the boss class as usual.

Obscene Salary for the Boss - Broken Promises for the Posties

After several months of negotiations between the union and Royal Mail management, it became clear that several promises in relation to pensions, job security and other important employment conditions were being reneged on by a management team more intent on retaining and expanding their grotesque pay and bonus packages than looking after the hard grafting posties who do the work and make the profits for the RMG.

The new boss of RMG, Rico Back, was paid an obscene £5.8 million compensation package to move from a subsidiary company of RMG to become their new boss. The Financial Times reported his new salary would be substantial:

“Mr Back will receive a base salary of £640,000 as Royal Mail group chief executive and a cash pension allowance of 17.5 per cent of base salary, in addition to a potential annual bonus of 200 per cent of salary”.

RMG were able to offer a massive salary, pension deal and bonus scheme to the new incoming Chief Executive but nothing but smoke and mirrors promises for their ordinary workforce. The union felt utterly betrayed by management’s broken promises, and reluctantly concluded the only way they could persuade the bosses to respond to their member’s job and pension concerns was to ballot for industrial action.

Therein lays the difference between trade unions and employers and employer organisations. Trade unions are open and democratic organisations. Disgraced since the Thatcher years of union-bashing and economic vandalism which decimated industry across the UK, trade unions have found themselves severely restricted in their ability to fight against job losses and bad bullying bosses by anti-trade union laws designed to effectively outlaw strikes.

It is an indictment of Thatcher that her industrial relations Acts left the UK the most restricted of the advanced nations in Europe in relation to trade union rights and freedoms. Thatcher hated trade unions because they organise working-class people and give them collective power. She wanted them stripped of their ability to organise so ordinary workers were left isolated and powerless.

Thatcher Stole Essential Industries – Time to Take Them Back
Thatcher was a hard-line Tory who represented the ruling class who supported her. The greatest compliment former National Union of Mineworkers (NUM) leader Arthur Scargill paid her was to suggest the working class need leaders who will represent them with the same commitment and passion that Thatcher displayed in support of the ruling elites during her 1979-1991 terms in office.

Thatcher took on the health trade unions, the steelworkers, the printers and then the NUM during her tenure. Despite having the panoply of the state on her side, including the police, the courts, the media, the social security system and weak Labour leaders, the miners came agonisingly close to defeating her under Scargill’s leadership. The March 1984 to March 1985 strike she precipitated and planned for was accurately described as ‘a civil war without bullets’ but sadly she won and every coal mine across the UK was eventually closed and the NUM destroyed.

The anti-trade union laws she used against the miners were beefed up by successive Tory governments and the latest set of measures which introduced ridiculously difficult thresholds for successful strike ballots was enacted in 2016. How shameful it was that the Blair/Brown governments of 1997-2010 lifted not a finger to repeal anti-trade union laws that have been condemned by human rights organisations and the International Labour Organisation (ILO) as severe infringements on the freedoms of trade unions.

Thankfully Corbyn’s Labour party has committed itself to repeal those anti-trade union laws. That’s another reason why the rich bosses of Britain despise him and his policies. The thought of ordinary workers becoming empowered in the fight for better employment conditions scares them in their comfortable boardrooms as they devise more schemes to further enhance their already bloated salaries and pensions.

The words of CWU leader, Dave Ward, deserve to be publicised widely and paid heed by ordinary workers across the UK. This judgement should alert every worker to the rigged class nature of the courts and legal system as it exists first and foremost to defend the status quo, the British elites, the rich and the powerful:

If this decision took place in Cuba, Venezuela, Russia or any other country considered undemocratic by the Western billionaire media it would be condemned with relish as evidence of restricted freedom. Yet it took place in London and got hardly a comment on the broadcast media, Channel 4 accorded it less than 10 seconds.

This strike ballot was held between September 24th and October 15th. The Electoral Reform Services who conducted the ballot confirmed it was run in full accordance with the law, and after over seven weeks since the ballot commenced, not one single person has complained to the certification officer who is appointed by the Government to regulate trade unions.

Labour’s John McDonnell Warns of ‘Socialism or Barbarism’ and Promises Free Adult Social Care in UK
Today’s decision is truly outrageous and disgraceful. The CWU intend to appeal the decision in the courtroom but inevitably they and all organised workers will only get justice through action and organisation outside the rigged bosses’ courts. The CWU have had their freedom to organise and defend their members’ rights and conditions unfairly curtailed today but the same laws will be used against other unions who dare fight their bosses tomorrow.

United, bold and widespread solidarity action across all trade unions is necessary to force the scrapping of the anti-union laws. I’m on the side of the posties and the trade union movement in this class war.

000000
Popular comments
Yes, Mr McDonnell, Hitler once remarked that barbarism was nothing to be ashamed of ; it purified the nation..... A considerable number of today's Tories are probably the great grandchildren of the British fascist-sympathisers, who swooned at the magificance of Hitler and Mussolini. Most of the monied people in the West would have been of that persuasion. According to the distinguished post-war historian, A J P Taylor, Quentin Hogg, later to become Lord Hailsham, Baronness Cardboard's Mr Law and Order, canvassed for the Tory seat of Oxford under the slogan : 'A vote for Hogg is a vote for Hitler. Tories have denied it in the press, saying it was a man called Brown, but A J P Taylor was clearly a very sedulous and meticulous historian in his research : not a man to make such a cardinal error. Incidentally,as not Anthony Blair the leader of a 'Controlled Opposition', to whit, NuLab(c) ? 'Figs don't grow upon thorns', do they ?
pbecke
15 November 2019, 00:05 GMT1
000000
Yes. Absolutely right.
pbecke
17 November 2019, 01:40 GMT1
000000
Newsfeed
0
New firstOld first
loader
LIVE
Заголовок открываемого материала
Access to the chat has been blocked for violating the rules . You will be able to participate again through:∞. If you do not agree with the blocking, please use the feedback form
The discussion is closed. You can participate in the discussion within 24 hours after the publication of the article.
To participate in the discussion
log in or register
loader
Chats
Заголовок открываемого материала
Worldwide
InternationalEnglishEnglishMundoEspañolSpanish
Europe
DeutschlandDeutschGermanFranceFrançaisFrenchΕλλάδαΕλληνικάGreekItaliaItalianoItalianČeská republikaČeštinaCzechPolskaPolskiPolishСрбиjаСрпскиSerbianLatvijaLatviešuLatvianLietuvaLietuviųLithuanianMoldovaMoldoveneascăMoldavianБеларусьБеларускiBelarusian
Transcaucasia
ԱրմենիաՀայերենArmenianАҧсныАҧсышәалаAbkhazХуссар ИрыстонИронауОssetianსაქართველოქართულიGeorgianAzərbaycanАzərbaycancaAzerbaijani
Middle East
Sputnik عربيArabicArabicTürkiyeTürkçeTurkishSputnik ایرانPersianPersianSputnik افغانستانDariDari
Central Asia
ҚазақстанҚазақ тіліKazakhКыргызстанКыргызчаKyrgyzOʻzbekistonЎзбекчаUzbekТоҷикистонТоҷикӣTajik
East & Southeast Asia
Việt NamTiếng ViệtVietnamese日本日本語Japanese中国中文Chinese
South America
BrasilPortuguêsPortuguese
NewsfeedBreaking
13:35 GMTKremlin Says No Decisions Made on Mandatory Vaccination Against COVID-19 in Russia
13:33 GMTCalifornia School Board President Under Pressure to Resign After Heard Saying 'F**k You' to Parent
13:31 GMTUS High School Under Investigation Over Photos of Students Giving Teachers Lap Dance
13:23 GMTMunich Security Conference Chief Warns Against Removing US Nukes From Germany
13:16 GMTShah Rukh Khan's Son Aryan Finally Gets Bail in Drugs-on-Cruise Case
13:13 GMT'Breach of Privacy': Netizens Slam Indian Cops for Stopping Commuters to Check Phones for Drug Chats
12:50 GMTSputnik V Forming Good Cellular Immunity in Children, Moscow Mayor's Office Says
12:49 GMTIndian Farm Laws: Modi Gov't Under Fire as Three Female Protesters Are Killed by Truck
12:39 GMTBillionaire Tax Dispute: Musk Says Plans to Use Money For Mars Mission, Sparks Twitterstorm
12:30 GMTDozens Charged Over Violent BLM Protests in Sweden
12:22 GMTIndian Prime Minister Narendra Modi Enjoys Rise in Popularity Following US Visit, New Poll Shows
12:10 GMTTurkey Considering Buying Russian Su-35s, Su-57s If US Fails to 'Resolve the F-35 Issue'
12:02 GMTFrench Counter-Terrorism Agency Thwarts 'Plot to Overthrow Genocidal Government'
12:00 GMTSergi Barjuan Replaces Ronald Koeman as Barcelona's Interim Coach
11:58 GMT'Selling Lingerie or Mangalsutra?': Netizens Troll Fashion Designer Sabyasachi for Viral Necklace Ad
11:36 GMTBarcelona Reportedly Reaches Agreement With Xavi After Firing Ronald Koeman
11:34 GMTLondon Train Driver Who Caused Collision Arrested After 'Testing Positive for Cocaine'
11:34 GMTMacron: Australia Must Suggest Steps to Repair Relations With France After Diplomatic Crisis
11:30 GMTUS AG Garland Affirms First Amendment Protection of Nazi Salutes
11:17 GMTLeningrad Region Develops Cross-Border Cooperation Amid Pandemic