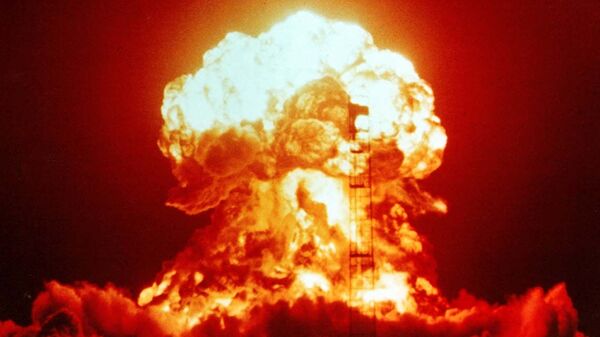 CC BY-SA 2.0 / The Official CTBTO Photostream / Nuclear Test
Subscribe
International
India
Africa
New data from a Japanese satellite has provided the most detailed look yet at the effects of Pyongyang’s 2017 thermonuclear weapon test, including an estimate of the bomb’s explosive yield.

Initial estimates for the Democratic People’s Republic of Korea’s (DPRK) September 3, 2017, thermonuclear weapon test put the explosion at between 50 and 70 kilotons in strength, with some later revisions going as high as 400 kilotons. However, estimates based on ground displacement drawn from satellite imagery by the Indian Space Research Organization (ISRO) have upped the yield considerably, to a much more powerful yield of between 245 and 271 kilotons.

That’s about 17 times stronger than the “Little Boy” bomb used by the United States to destroy the Japanese city of Hiroshima in August 1945, together with the subsequent bombing of Nagasaki the only instances of nuclear weapons ever being used in anger. However, for a hydrogen bomb, it’s still rather small: the first US H-bomb test in 1952 was an incredible 10.2 megatons, nearly 700 times stronger than Little Boy.

The scientists used data from Advanced Land Observing Satellite 2 (ALOS-2), a Japanese satellite sporting a powerful PALSAR-2 synthetic aperture radar used for cartography, to measure displacement on the surface of Mount Mantap, inside which the H-bomb test occurred. They used a technique called Synthetic Aperture Radar Interferometry (InSAR), which according to the US Geological Survey is commonly used to accurately measure ground deformations associated with volcanoes, which can swell up before erupting.

"Satellite-based radars are very powerful tools to gauge changes in earth surface, and allow us to estimate the location and yield of underground nuclear tests,” Sreejith said in a Thursday press release. “In conventional seismology by contrast, the estimations are indirect and depend on the availability of seismic monitoring stations."

The satellite measured a shift in the mountain’s surface of several meters just above the explosion, which also moved the flank of Mantap’s peak by roughly 0.5 meters. They estimated the explosion itself took place about 540 meters below the summit, creating a cavity inside the mountain with a radius of 66 meters.

While the test was carried out deep underground, as has been standard practice for decades in order to minimize radioactive fallout, some radiation leakage was recorded following the 2017 explosion, and fears the mountain might collapse on itself, releasing the radioactive material trapped inside, persisted after the test.

Months of revanchism followed the test, with the US, South Korea and Japan engaging in serious discussions about a strike on the DPRK’s nuclear facilities. However, Seoul and Pyongyang began to bury the hatchet the following January when they competed under a common flag at the Pyeongchang 2018 Winter Olympics, and a unilateral nuclear test ban was adopted by the North shortly thereafter, which has held ever since.

Since June 2018, the US and DPRK have engaged in several rounds of negotiations, attempting to reach an agreement that would lead to denuclearization of the Korean Peninsula, but none have yet succeeded.