See For Yourself: Tana Mongeau Under Scrutiny For ‘Unrecognisable’ Photo Editing Gaffe 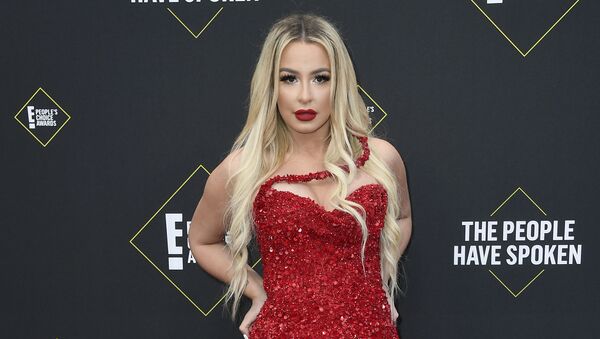 American media personality Tana Mongeau, who managed to reach the A-list of Hollywood stars via her blogging career despite – according to her – having no apparent talent, has recently been criticised for her growing reliance on photo editing tools.

YouTube star Tana Mongeau is facing public scrutiny after sharing a photo of herself that seems to have been heavily edited, apparently changing the blogger’s facial structure.

The photo, taken during the People’s Choice Awards red carpet event on Sunday, was initially shared by the 21-year-old on her Instagram account. While Mongeau’s fans could not stop complementing the blogger for her gorgeous looks, they were later delighted when Reddit’s InstagramReality page shared an actual photograph of Mongeau while comparing it with an edited version.

Netizens could not help but point out the number of edits the 21-year-old YouTube star had done, transforming the shape of her face with a change to her jawline structure, saturating the colour of her skin and eyebrows, as well as altering the shape and size of her eyes and lips, with many arguing that the star looked almost unrecognisable in the edited version. Mongeau’s arm and nose also appeared to be slimmed in the photo.

“That jaw reduction makes her unrecognizable”, another noted.

“I feel like only her neck stays the same”, a different netizen concluded.

Some, Twitterians, nevertheless, pointed out that her edits did not make any sense, as Mongeau already looked exceptionally stunning in her original photo.

​Mongeau, who was nominated for the Social Star by the People’s Choice Awards this year, has never concealed her love for photo editing and heavy reliance on Facetune. She has not commented on the backlash yet.