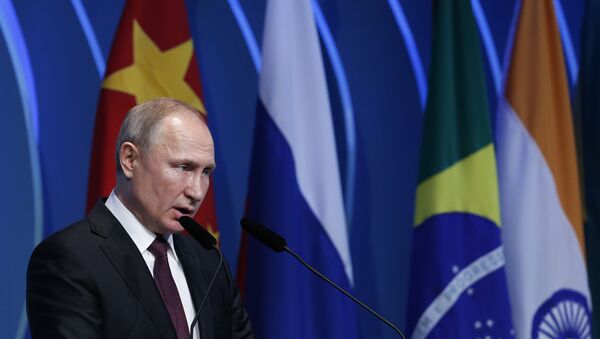 BRASILIA (Sputnik) – Russian President Vladimir Putin said the country's presidency of BRICS the next year would be focused on the further development of trade and investment cooperation among member states, adding that Moscow will prepare a busy program of events for the next year’s BRICS summit in St. Petersburg.

"Of course, the issues pertaining to further development of trade and investment cooperation would be among our priorities. We plan to suggest to the BRICS counties to revitalize our strategy of economic partnership which was adopted at the previous summit in Russia, in Ufa, in 2015 … I would like to highlight that for the BRICS summit in St. Petersburg — it is there where we are going to hold the next BRICS summit in July of 2020 — we have prepared an extensive program of events and many of them will be dedicated to economic cooperation", Putin said at the BRICS Business Forum on Wednesday.

Putin added it would be practical to think about what new goals BRICS states should set before them and what major targets in trade, finance, and investment they should focus on. 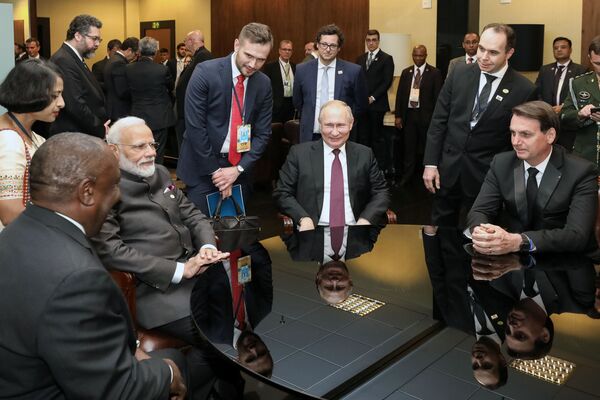 Earlier in the day, Vladimir Putin suggested that other BRICS countries should pay closer attention to its digital technologies adding that Russia stands ready to exchange experience in this area.

"There are good chances for boosting our cooperation in computer science and telecommunications. Russia offers BRICS states to take a closer look at our newest projects. I am talking about the technologies of electronic document management, search systems and antivirus software that responds to the highest advanced security requirements", Putin said at BRICS Business Forum. "I would like to remind you that Russia has voiced in an initiative to launch a network of data exchange for small- and medium-sized businesses within BRICS. This would allow business circles of our countries to receive fresh data on goods, services, and suppliers and search and find new partners", Putin continued. "Russia reliably ensures deliveries of energy materials to global markets and makes a significant contribution to supporting global energy security which is vital for economic growth and social development. We are ready to expand cooperation with BRICS states in using environmentally friendly types of fuel", Putin added.

Putin noted that the BRICS Business Forum helped step up trade and investment and strengthen economic ties between the allies.

"More than 1,000 people attended it. A lot of interesting projects have been discussed and a lot of promising agreements have emerged. What we have to do now is implement them. On our part, we are ready to help entrepreneurs. We all know that the situation in the global economy remains difficult", the President explained.

Putin argued that over recent years, various unfair competition practices, including politically motivated ones, and protectionism have been prevailing in the global economy. 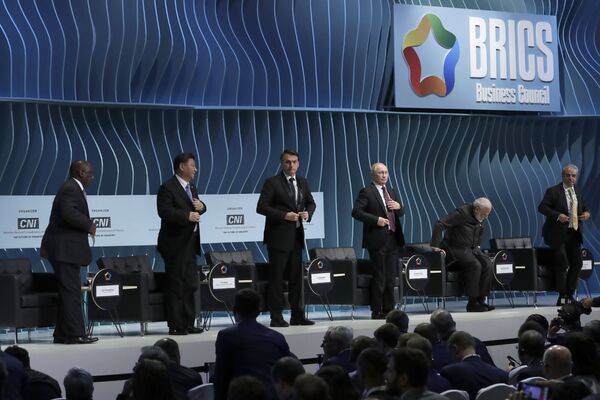 The President noted that in that situation, BRICS countries had to make significant efforts for ensuring the development of their economies and avoiding worsening of the economic situation.