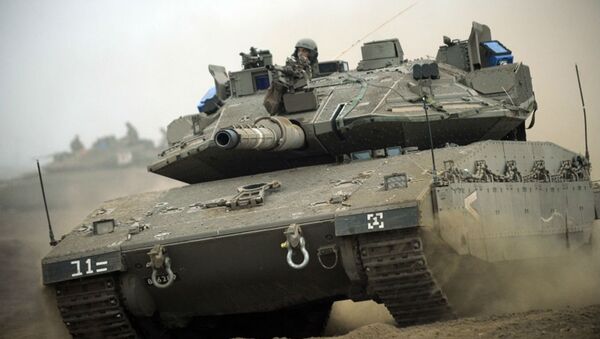 Following the death of Islamic Jihad commander Baha Abu al-Ata on 12 November, the group vowed revenge, with hundreds of rockets being fired at Israel in recent days.

On 12 November, the Israel Defence Forces (IDF) announced that Gaza-based Islamic Jihad commander Baha Abu al-Ata, referred to by an IDF spokesman as a “ticking bomb”, had been killed as a result of an Israeli targeted strike on his home in the early hours of Tuesday morning.

The death of the Islamic Jihad commander was initially followed by more than 200 rockets fired from Gaza, allegedly launched in retaliation by the Palestinian group. Israel intercepted most of the aforementioned projectiles, while carrying out several airstrikes on training and military compounds in Gaza, killing a number of Palestinian militants.

Following the incidents, a ceasefire was established between the parties in the early hours of 14 November that was brokered by Egypt and greenlighted by the Palestinian group.

The IDF acted decisively and precisely against Islamic Jihad in Gaza until peace and quiet finally returned to the skies above Israel.

Quiet will be met with quiet.

We will continue to protect the people of Israel and are prepared for any threat on all fronts.

The ceasefire did not last long, with sirens heard across southern Israel after several rockets were fired from Gaza just hours later. Middle East Studies Professor at Ben-Gurion University Yoram Meital argued that the crisis would likely continue. He emphasised that while both parties were able to agree only “on basic terms of ceasefire”, the conditions of which have not been announced yet, the recently agreed peace was “highly fragile”.

​An expert in international relations at Tel Aviv University, Dr Emmanuel Navon, in his turn, opined that the recent ceasefire marked “a new stage in the war between Israel and the Gaza Strip”, as Islamic Jihad had managed to present itself as an independent and self-sustaining party to the conflict.

“In the past Israel negotiated with Hamas via Egypt but now the negotiations were with Islamic Jihad which did not heed to the orders of Hamas”, Dr Navon said, adding that in other words, Islamic Jihad is really acting as an independent organisation. He also believes that the group was presenting itself to the Gazan population as “a more radical alternative” to the “weak” Hamas.

The Gaza Strip could now become a more complex and “explosive” issue that cannot be ignored by Israel, the expert says.

As the situation on the ground still remains restless, with the IDF claiming to have intercepted 90% of the more than 450 rockets fired from Gaza at Israel over the last three days, many have found themselves surprised by how a limited local organisation, in which al-Ata was reported to have been a senior commander, had managed to create such chaos in Israel for several days.

“This militant organisation has demonstrated the ability to harm the depth of the Israeli home-front, to cause her considerable material losses, and create an atmosphere of fear among thousands of Israelis”, Yoram Meital concluded.