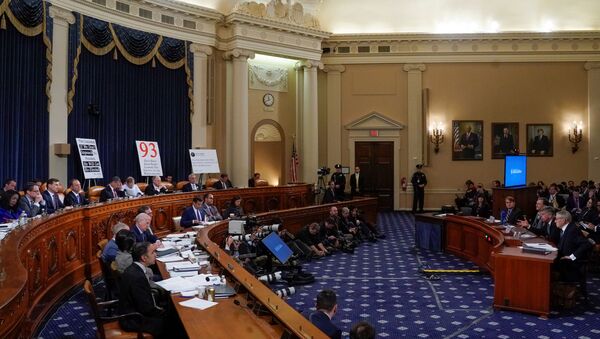 The first congressional public impeachment hearing in 20 years saw the Democrats’ partisan pick - that is two US diplomats offering their account of what went on during President Trump’s July phone call with his Ukrainian counterpart Volodymyr Zelensky.

William Taylor, the acting ambassador to Ukraine, and George Kent, the deputy assistant secretary of state for European and Eurasian affairs, testified for over five hours amid persistent talk about whether POTUS has really done anything “impeachable".

Here are the main highlights of yesterday’s historic procedure:

The envoy to Ukraine, the former West Point graduate and decorated Vietnam War veteran, is the proud owner of a deep baritone voice, which came in handy as he depicted an “irregular” foreign policy course regarding Ukraine led by Rudy Giuliani, Trump’s personal attorney. In his testimony, Taylor explained why he had raised concerns with colleagues after learning that the White House was withholding nearly $400 million in security aid to Kiev allegedly until it kickstarted investigations into the Bidens’ dealings in Ukraine.

“That security assistance was so important for Ukraine as well as our own national interest. To withhold that assistance for no good reason other than help with the political campaign made no sense", Taylor testified.

“It was counterproductive to all of what we had been trying to do. It was illogical. It could not be explained. It was crazy", Taylor concluded.

Yesterday’s hearing appeared to be comparatively subtle, with Democrats going to great lengths to regain control of the agenda if it was lost.

In one flare-up, the Republican counsel, Steve Castor, raised a question suggesting Ukraine might have meddled in the 2016 elections in the United States. In light of the hypothesis having been dismissed by all the US intelligence agencies, Adam Schiff, the head of the Intelligence Committee who led the hearing, moved swiftly to shut the thread down, objecting to questions based on “facts not in evidence".

In another, Republican Rep. John Ratcliffe directed a question at Schiff. It quickly prompted another Democrat, Rep. Eric Swalwell (Calif.), to butt in with a point of order, citing formal rules that questions must be directed to witnesses and not to moderators.

“I yield back", Ratcliffe answered.

The witnesses were naturally subjected to Republican questioning as well, with the GOP pointing to the given evidence largely being second-hand and attitudinal, based on facts spread by word of mouth and thorough a game of telephone.

“Ambassador Taylor recalls that Mr [Timothy] Morrison told Ambassador Taylor that I told Mr Morrison that I had conveyed this message to Mr [Andrey] Yermak on 1 Sept 2019, in connection with Vice President Pence’s visit to Warsaw and a meeting with President [Volodymyr] Zelensky", Ohio Rep. Jim Jordan said, reading a statement from Gordon Sondland, the ambassador to the European Union.

“We’ve got six people having four conversations in one sentence, and you just told me this is where you got your clear understanding", Jordan told Taylor.

Democrats appeared to have been proved wrong, claiming before the hearing that the testimonies would hardly be ground-breaking, since it was the second time the aforementioned career diplomats were to testify. The first time was on 22 October, and it appears Taylor had something new up his sleeve after his closed-door deposition.

Taylor added a bit more fuel to the fire, saying a member of his staff had overheard a 26 July phone conversation between Trump and Sondland, in which Trump allegedly asked Sondland “about the investigations". Sondland, Taylor added, responded that “the Ukrainians were ready to move forward".

“Following the call with President Trump, the member of my staff asked Ambassador Sondland what President Trump thought about Ukraine", Taylor testified before recounting what Sondland had to say:

“Ambassador Sondland responded that President Trump cares more about the investigations of Biden which Giuliani was pressing for".

The GOP, however, struck back arguing that was yet another instance of second-hand information from a witness whose previous testimony they’d already played down as “hearsay".

The hearing, although it was public and televised, hardly provided any bombshell evidence worthy of media headlines.

First of all, Taylor and Kent are not well-known household figures. Secondly, some deemed this beating around the bush as something that would not sway Republican sceptics or the general public’s opinion and move them in favour of impeachment.

“It absolutely will NOT and undecided voters will not be swayed by today’s testimony", Rep. Mark Meadows, who was present at the hearing, shared in a text message to The Hill, arguing, that quite the opposite, “most people will be glad the foreign aid was not given so freely to a corrupt country".

Similarly, Devin Nunes, the senior Republican on the House intelligence committee, ripped the hearings as an "impeachment process in search of a crime" and a "low-rent Ukrainian sequel" to the Mueller Report into the now busted claims of Russian collusion with the Trump campaign in 2016.

In late September, US House Democrats launched an impeachment inquiry into a whistleblower complaint that claimed Trump might have committed an abuse of power by allegedly pressuring Volodymyr Zelensky to investigate potential corrupt activities by former Vice President Joe Biden and his son Hunter. The latter was deemed as a call to dig up dirt on Trump’s potential rival in the 2020 election.

The Bidens said Trump’s allegations are unfounded, while Trump referred to the conversation as absolutely benign and suggested that other countries also look into the former VP's family.

He dubbed the proceedings a new stage of “witch hunt garbage” arguing it is a classic example of a politicised move to discredit him ahead of the 2020 elections.