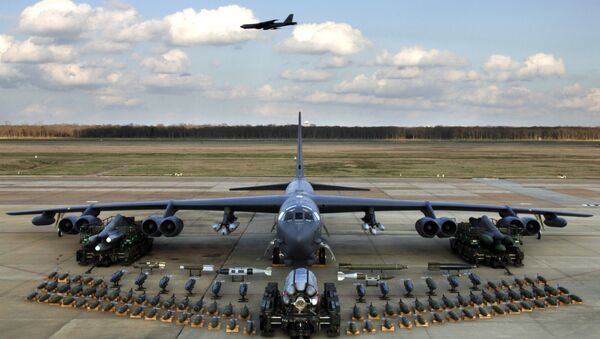 Rather than develop a new bomber to serve as its “missileer” of the future, the US Air Force is exploring how to turn one of its present aircraft into a long-range missile platform.

On Tuesday, Assistant Secretary of the Air Force for Acquisition, Technology and Logistics Will Roper told reporters the service wanted to turn its present bomber fleet into “something else” capable of packing a long-range punch.

US bombers carrying cruise missiles is nothing new, but the primary role of strategic bombers like the B-52 Stratofortress and B-1B Lancer has been what bombers were always expected to do: fly over targets and let gravity deliver munitions from their bomb bays to their intended targets.

However, with air defenses being more sophisticated than ever, is it really worth it to risk a $415 million B-1B in order to strike a target? The Air Force has judged not, preferring its upcoming B-21 Raider stealth bomber for deep strikes.

“Can we think more broadly about how an airplane carrying a lot of weapons can be looked at?" Roper said, according to Military.com. "[For example], how does this standoff bomber work in the contested environment in a way that's complementary with the B-21?"

The challenge is how to turn a B-52, designed in an era when gravity bombs were a bomber’s only weapons, into a “missileer,” Roper said. It’s a problem the Strategic Capabilities Office has been working on since 2016, although the “mobile arsenal” idea was first floated in 1995, when the US Navy suggested building a massive ship with 160 to 200 launch tubes for intense coastal bombardment.

In a 2018 solicitation, the Air Force sought help with “the integration of replace external heavy weapons delivery system onto the B-52H aircraft ... capable of carrying multiple weapons in the 5,000 lb to 20,000 lb weight class.” The pylons would be located under the bomber’s wings.

Some of the missiles the B-52 can now deploy include the Joint Air-to-Surface Standoff Missile (JASSM) and its variants, the Long Range Anti-Ship Missile (LRASM), and the hypersonic Air-Launched Rapid Response Weapon (ARRW), the latter of which was tested for the first time this past June.

Further down the line, the Long-Range Standoff Weapon (LRSO), a nuclear-capable cruise missile, is expected to buttress the US nuclear triad as well as keep the B-52, perhaps the only aircraft capable of carrying the huge weapon, relevant.

Gen. John Hyten, commander of US Strategic Command, observed in 2017 that without the LRSO, "you don’t have the B-52 as a viable platform.”

China and Russia, nations the Pentagon has identified as its primary “great power” adversaries, have also pushed ahead with both their hypersonic missile arsenals and with developing air-launched ballistic missiles. China’s People’s Liberation Army Rocket Force (PLARF) has long sought to specialize in mass missile attacks, a tactic it hopes will overwhelm US naval defenses at standoff range.

Military.com noted that other planes being explored for the “arsenal plane” role include the C-17 Globemaster III transport aircraft and the C-130 Hercules transport, which already has a close air support version fitted with various weapons. A similar proposal by Boeing got as far as a patent for a retractable cannon mounted inside the B-1B’s bomb bay, the outlet noted.