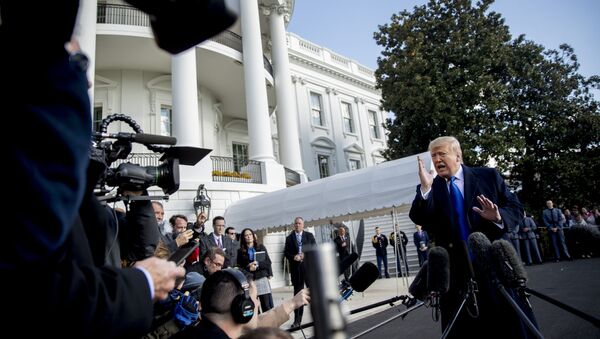 WASHINGTON (Sputnik) - Several hundred people have gathered outside the White House in protest of the visit of Turkish President Recep Tayyip Erdogan to the United States to meet with US President Donald Trump.

The protesters are holding Kurdish, Armenian and US flags and are shouting slogans critical of Turkey.

Some are carrying banners that say "Erdogan is Not Welcome", "Recognize Genocide", "Out of Rojava" and "We Support Our Friends - the Kurds".

Kurdish-Americans angry at President Trump for meeting Turkey’s Erdogan. Protests take place in front of the White House. The meeting started at noon, expected to end around 3 pm. pic.twitter.com/NlZZsBcRmU

​The protest is peaceful and there is no increased police presence in the area.

After giving Turkey the green-light to attack the Kurds Trump has the audacity to invite Erdogan to DC.

So these good people are protesting at the White House right now.

​Erdogan and Trump are expected to discuss the situation in Syria, the Russia-supplied S-400 air defence systems to Turkey and the F-35 fighter jet programme, among other issues.

Last week, the two leaders confirmed over the phone the meeting will take place given that Erdogan’s trip was uncertain amid growing tensions between Turkey and the United States following the Turkish military offensive in northeast Syria last month.

Turkey's purchase of S-400 air defence systems, US congressional resolutions on the Armenian genocide and sanctions against Ankara have also contributed to the escalation in tensions between the two countries.