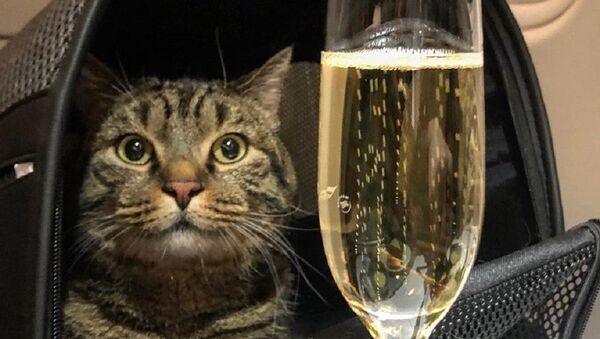 The chubby cat Viktor and his owner Mikhail Galin became famous last week after the Russian airline company Aeroflot refused to let the animal in the cabin due to its weight, which was 10 kilos (22 pounds), while the limit is 8 kilos (17.5 pounds). This resulted in a complicated infiltration op that looked like part of a crazy spy thriller.

Mikhail Galin, who used a decoy cat to bring his own oversized cat on board, commented on the decision by Russia's Aeroflot to exclude him from its loyalty programme and scrap his bonus miles.

According to the man, the feline was slobbering and breathing heavily due to the stress, so it could not be left in the luggage for the duration of the long flight from Moscow to Vladivostok.

"I had no moral right to send him to the luggage compartment, as I understood he would not survive an 8-hour flight", Galin said, explaining that officials at Sheremetyevo Airport refused to let him take his companion on board – even for an additional charge.

As a result, Galin had to book another ticket and asked his friends on Facebook to find another feline that looked like Viktor, but less obese.

At the same time, the man refused to criticise Aeroflot for imposing such strict rules or cancelling his bonus miles, noting that the company was just abiding by regulations.